The most searched celebrity on Google 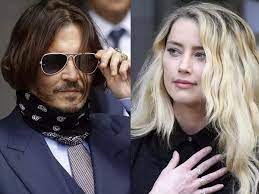 The defamation case between hollywood star johnny depp and his ex-wife Amber Heard was in the news. Well, johnny depp may have won the case, but he has lost out to Amber when it comes to being the most searched celebrity on google in 2022. Yes, according to hollywood website celebtattler, 36-year-old Amber Heard has become the most searched celeb on google leaving behind many celebs including Kim Kardashian, Elon Musk, johnny Depp.

The case of Amber Heard and johnny depp was in discussion every day. A new report says that Amber is the most searched celebrity on google in 2022. The actress was searched on an average of 5.6 million every month in the US. More than 150 celebs have been tracked and Amber has been crowned number 1 while Johnny, on the other hand, is second on the list with 5.5 million searches. Meanwhile, Kim Kardashian, Elon Musk, tom Brady, Pete Davidson and the late queen Elizabeth II are also included in this list.

The proceedings of the trial of johnny depp and his ex-wife Amber Heard lasted for several weeks. During the hearing, serious allegations were also made from both the sides. Eventually, the jury, while giving its verdict, ordered Amber to pay $10 million to johnny depp, while Depp was also ordered to pay $2 million in damages. After this decision, Amber's legal team had said that they do not have enough money to pay the damages.