Books or Boo ?? Samantha gets Trolled on Insta Stories

Books or Boo ?? Samantha gets Trolled on Insta Stories

samantha Ruth Prabhu appears to be having a wonderful time in Kashmir, as she is not only taking in the sights but also undertaking a variety of other activities. In truth, the top siren was there for a few weeks to film her latest film with Vijay Devarakonda, which is directed by majili star Siva Nirvana. 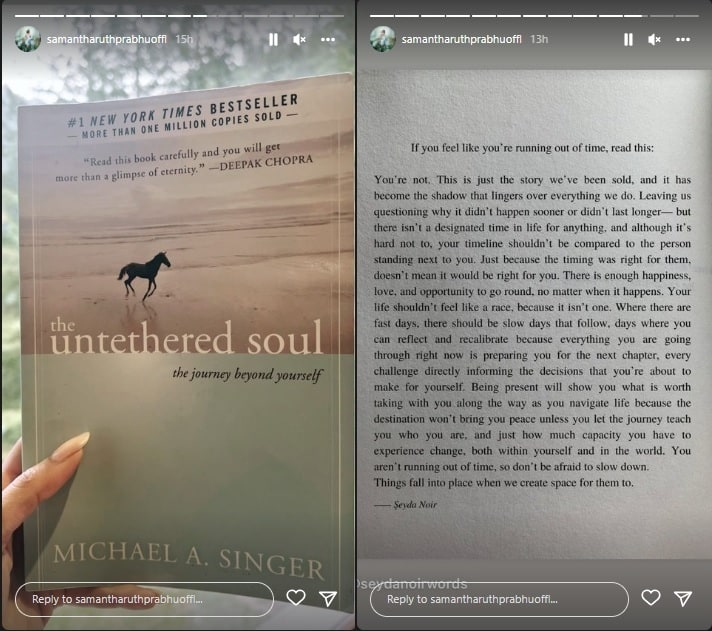 Samantha startled her good friend, stylist Neeraja Kona, with whom she had reconciled after a long-distance relationship, by posting a bathroom mirror selfie. Later, the actress posted an ethereal photo of the magnificent scenery she is enjoying from her accommodation in Kashmir's pahalgam district. During break time, she revealed that her most recent read is the new book "The Untethered Soul."

#VD11, the film's unit, is believed to be having a great time there, having celebrated Samantha's birthday first and Vijay Devarakonda's birthday afterwards. While the shoot is going well in the lovely locales, samantha is making the most of her leisure time. The actress is giving the delight to her fans by sharing all of this on social media. However, some netizens mocked samantha for her books interest and they called it as Books or Boo** and tormented her.