Deputy Divisional Magistrate Tanbir Tagore said the National Disaster Rescue Force would soon arrive at the scene to carry out rescue operations. A cable car operating in the Parwanoo area of himachal pradesh was stopped midway, causing a commotion. Seven of the eleven tourists trapped in the cable car have so far been rescued safely. Rescue operations are underway after the cable car was stopped midway this afternoon.

The rescue trolley is being used to rescue tourists trapped in the cable car. Rescued tourists are being unloaded in the hills where the Kaushalya River is located. "While the timber tail operator is engaged in rescue operations, police officers are monitoring the field environment there," said Solan district police S.I. 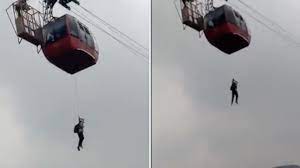 Deputy Divisional Magistrate Tanbir Tagore said the National Disaster Rescue Force would soon arrive at the scene to carry out rescue operations. The most popular feature of the Timber Trail private hostel is the cable car. The hostel is located at a distance of about 35 km from chandigarh on the way to Kasauli and Shimla. 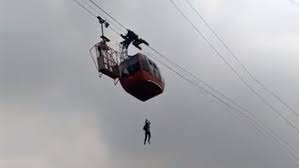 This region is located in the confluence of states like himachal pradesh, punjab and Chandigarh. Earlier a cable car accident took place in the same area. Ten people were rescued by the army and air Force during the 1992 crash of Akbodar. However, one person died.

It was dark when half of the victims were rescued. Rescue operations were suspended due to insufficient lighting. The next morning, rescue operations resumed. When the cable car lost control, its operator jumped out of it and crashed into a mountain.