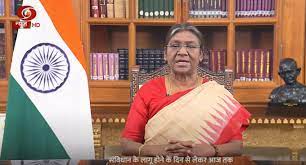 President draupadi murmu spoke in-depth about the country's post-independence development journey on Wednesday, the eve of Republic Day. The President claimed that india has changed from being a poor, uneducated country to one that is now self-assured on the international stage in his address to the nation.

Without the advice of the Constitution's framers' combined expertise, this advancement would not have been feasible. india, according to her, now boasts the fifth-largest economy in the world. This accomplishment was made in the midst of widespread economic unpredictability.

Highlights of the President's address

I send my warmest greetings to all indians living in india and abroad on the eve of the 74th Republic Day. When we commemorate Republic Day, we honour the accomplishments our country has done as a whole.

We are all indians and we are one. We are not divided by our different creeds and languages, but rather we are connected by them. We have been successful as a democratic republic because of this. This is what makes india unique. india has transformed from being a developing, illiterate country to one that commands respect on the international stage. Without the advice of the Constitution's framers' combined expertise, this advancement would not have been feasible.

India's economy rose to the fifth-largest in the world last year. This accomplishment was made in the midst of widespread economic unpredictability.

We quickly emerged from the recession and began our development journey with the aid of capable leadership and effective struggle. The National education Policy makes information based on our culture applicable to modern living and prepares students for the challenges of the twenty-first century.