Hindus will break you to pieces UK journalist expose the truth???

Hindus will break you to pieces'UK journalist expose the truth???

Hindus will break you to pieces: twitter deleted tweets of UK journalist who exposed the truth of 'Lester's fanatics'

The tweet shared by Waseq is only exposing those inciting violence against Hindus, spreading hatred, and spewing venom. But twitter called it a violation of its community guidelines and removed the video.

The mob of fundamentalists was so uncontrollable that they were attacking with things like sticks, sticks, and glass bottles. Properties were being destroyed. Some videos of these attacks were shared by a London-based journalist Wasik on his twitter handle. In this, he exposed those who spew venom against Hindus. people were able to know the ground reality of Lester by watching this, but twitter deleted these videos.

Journalist Wasiq Wasiq (Twitter handle @WasiqUK) had videos on twitter confirming the radical attacks. He was getting to know how Islamists spit venom against Hindus, gave provocative speeches, and incited people to violence. With the help of Wasik's post, the local police were trying to nab the accused, but only then twitter took its action. 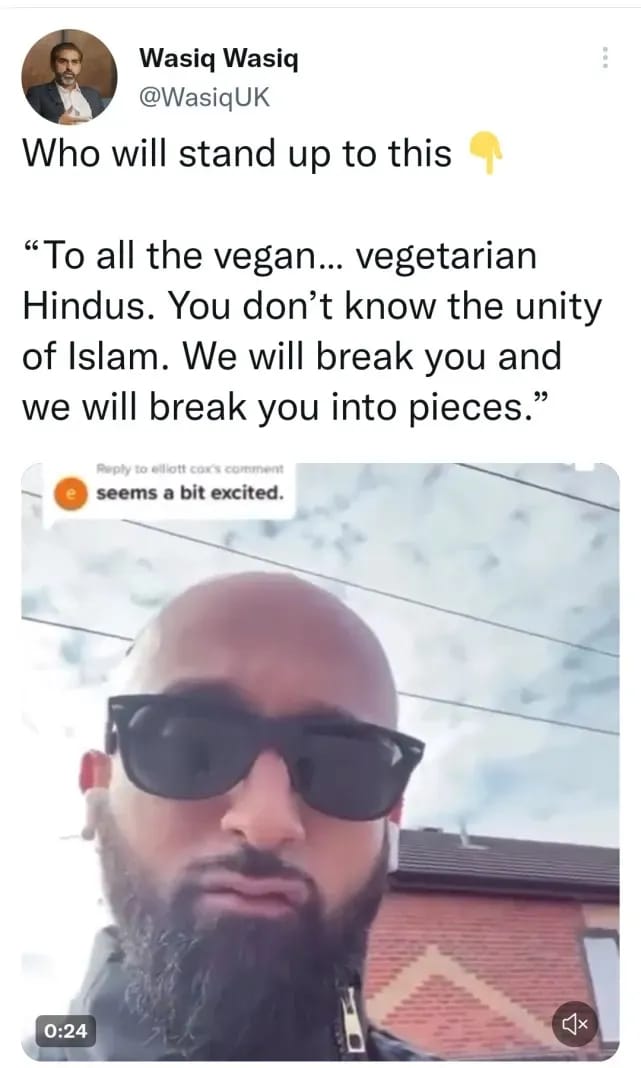 It can be seen that this tweet is only exposing those who incite violence against Hindus, those who spread hatred and spew venom. But twitter called it a violation of its community guidelines and removed the video. Their twitter may have also been locked, but OpIndia does not confirm this.

Let us tell you that a man named Adam Yusuf has been sentenced to one year in Leicester, england for attacking Hindu people by Islamic fundamentalists. He has been sentenced to one year in prison by the Leicester Magistrates' court after he confessed to carrying a knife in the attack on Hindu people in Leicester (mainstream media calling it a demonstration) on 18 september 2022. Earlier, 20-year-old Amos Noronha was found guilty of possessing a banned weapon. Amos Noronha was sentenced to 10 months in prison on monday (20 september 2022).