Hrithik roshan went on a dinner date with Saba azad, a fan asked for a selfie then pushed.

Hrithik roshan and his alleged girlfriend actress and singer Saba azad have been in discussions for a long time about their relationship. Both are often spotted together. Now once again both were seen together, but during this hrithik roshan got trolled for 'Attitude 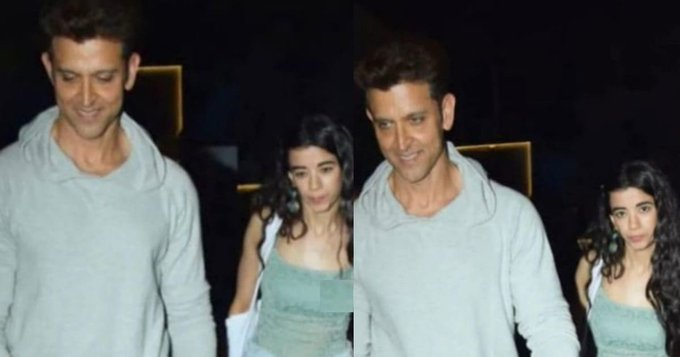 Actor hrithik roshan, who is called Bollywood's handsome hunk and rules the hearts of female fans, is making a lot of headlines these days for his relationship with actress and singer Saba azad, who is 17 years younger than him. . Both are often spotted together. Sometimes at the airport and sometimes outside a restaurant. Both can often be seen hanging out together. All three were seen spending time together on thursday night. Hrithik was out for a dinner date with Saba Azad. Recently, the actor has returned to mumbai after wrapping up the assam schedule of Fighter. What was it then, both went out together to spend time together?

On seeing both of them together, the paparazzi started running after them. Along with this, there was a competition among the fans to get photographed with the actor. A fan approached Hrithik for a selfie, but instead of clicking a selfie with the fan, the actor pushed him away and made way for Saba to sit in the car. Now, this video of both is becoming increasingly viral on social media. people are condemning this behavior of the actor and trolling him. While commenting, many have expressed displeasure over showing 'Attitude' to the fan.

At the same time, some people are also praising Hrithik, but the reason behind this is something else. In fact, during this time, hrithik roshan also met Saba Azad's ex-boyfriend Imad Shah and hugged him. Sabah and Imad are said to be part of an electro-funk band, and the two still perform together. In the pictures, Hrithik and Imaad are seen hugging each other in a super cool look. Hrithik and Saba are reportedly dating for the past few months. Saba made her acting debut with 'Dil Kabaddi' and was also seen in the film 'Mujhse Dosti Karoge' in 2011 opposite Saqib Saleem. He was last seen in the anthology series 'Feels Like Ishq'.