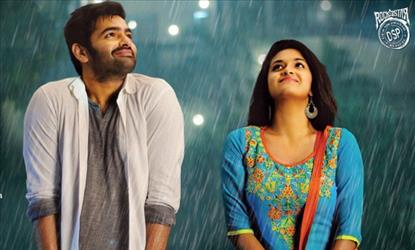 Shailaja (Keerthy Suresh) and Hari (Ram Pothineni) are childhood friends from the Araku Valley. As the love was blossoming between the two little hearts. Things fall apart in a short time and Hari leaves to Vizag with his family. From then on Hari tries to propose every alternate girl comes in life and fails. Both grow up in the respective places and meet up accidently. Due to a small incident with Shailaja’s friend Keerthi (Dhanya Balakrishnan), he succeeds in wooing Shailu. They once again turn out to be good friends, but Shailu’s life takes a drastic turn and forced to marry a relative (Chaitanya Krishna). From this onwards, the clash of their ideas about love crops up. What is the fate of love between Hari & Shailu with confounding views? That forms the rest of the storyline.

Performance-wise, Nenu Shailaja ranks well. Ram Pothineni looked cool as a happy-go-lucky guy. He has been continually delivering good performances and this film could be yet another addition to his list. His dialogue delivery is impressive in the film. The way Ram uttered Rayalseema words are quite funny. Keerthy Suresh is a big relief thanks to her refreshing looks and elegant expressions. Sathyaraj and Naresh Sr. are good in their respective roles. Though limited roles, Rohini, Vijay Kumar, Dhanya Balakrishnan, Krishna Chaitanya and Prince made their presence felt. The comedy by Pradeep Rawat works in parts. You barely notice the other supporting roles.

There is no freshness in the story of Nenu Sailaja. A crazy lad approach towards love being beguiled by a pretty beauty, later she is forced to get married another guy, the lad must return in disguise to win the big hearts of the bride’s family and marry her against all odds. The story reminds of themes like Solo, DDLJ, Manasantha Nuvve, Nuvvu Vasthante Nenodantanna.. etc. The premise on which film builds itself up, has no proper rules and pretty much nothing else and so when the base ceases in post interval, the fall is quite cruddy. Thank fully there isn’t much blood-shed, but regretfully there isn’t much feel, surprises or memorable emotional sequences either.

What stands out mainly in Nenu Sailaja due to the narrative style chosen by the scenarist and the director to convey what they have to say. Though Kishore Tirumala showcases a directorial style that’s slow and contrived which lends a wonted air to the entire film. While emotionally it’s pretty tyrannical, the film also sports a vague dullness throughout the film that makes it even more disjointed on important occasions. But the director managed to drive home some pertinent points till first half.

After a convincing first half that briskly passes by, the film grinds to a halt. It gains no further momentum and the story advances little ahead, which turns out to be a hang-up. Add to it, flash back of Sathyaraj-Vijay Kumar’s past and an ill-fitting romance and in an hour “Nenu Sailaja” turns out to be a farness from a decent film that it could have been. Director even left out the romantic thread between Sri Mukhi & Prince, Vamsi Krishna’s bad angle and what happened to Krishna Chaitanya post kidnap, points in the end. Music by Devi Sri Prasad is major asset of the film. Songs like “Shailaja Sailaja”, “Crazy Feeling” and “Em Cheppanu” are already chartbusters and are in sync with the mood of the film. Ramajogaiah Sastry deserves a special applause for his trendy and meaningful lyrics. The cinematography Sameer Reddy is good. The choreography of songs look fine. Editor should have trimmed a good 10-15 minutes or so from the second half to make it look crispier. Production values of Sravanthi Movies are alright.

Nenu Shailaja appears gallingly disjointed on occasions, but remarkably comical at others. It’s a very mixed bag of emotions at play here that will have you hooked most of the time (in the first half), thanks to the fine cast and director duo at its helm. But it breaks no fresh ground in the themes that it undertakes and the middle-brow manner that it adopts midway through makes it a spotty piece of work. On the whole, Nenu Shailaja could very well go down as a potentially well intentioned movie that ends being a melodramatic glop.