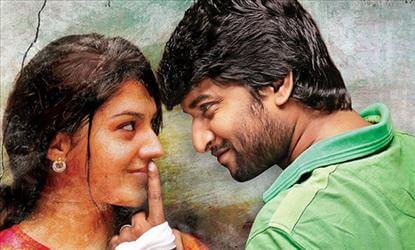 “Fear cannot be without hope nor hope without fear”, Baruch Spinozafamously stated. Nani’s character in Hanu Raghavpudi’s Krishna GaadiPrema Gadha might agree with this pronouncement.Set in a small town in Hindupuram with all that true accents and localspecialties (including Balakrishna Mania), the movie has Nani BabuGhanta as Krishna, a coward happy go lucky guy who falls head overheels in love with a beautiful Mahalakshmi (Mehreen). Hailing from awealthy and faction family, Mahalakshmi is in effect at the other endof the lifestyles that Krishna owns, who with his thoughts are atimpossible odds for a love and happy life with Mahalakshmi. But thesurprise comes in the form of no big conflicts, but with thefactionist family of Mahalakshmi. Other side world famous Don Davidreturns to Hyderabad to full fill her mother’s final wish. But thingsturn around when ACP Srikanth (Sampath Kumar) kids get kidnapped fromRamaraju’s house. The movie loses its intensity as it progresses andends up as a decent faction based love story.

The movie thrives on performances and Nani is a runaway winner amongactors. He delivers a knockout performance in what is essentially adifficult role. He shows a remarkable flexibility. Canadian girlMehreen Kaur Pirzada is aptly casted in the film and she is good withher histrionics. Satyam Rajesh, Bhramaji and Prabhas Seenu are superband it is their spontaneous humour and witty liners that keep themovie entertaining. Antagonists Ramaraju, Satru, Harish Uttaman,Murali Sharma and Ravi Kale did their best in their promising roles.Sampath Kumar is neat as a powerful ACP Srikanth. The child actorsBaby Nayana, Moksha and Sri Pratham are good in their roles.

Krishna Gaadi Veera Prema Gadha starts off pretty well, but as thedrama unfolds the grip starts loosening up. Movie a sort of inspiredfrom various Telugu commercial hits relies too heavily on an age oldtheme. Though the basic idea is interesting, the execution lacks thegrip to keep you enthralled. The fault lies in the way the writer anddirector presented the story.

From the script point of view, the story ends soon after the interval,when Nani meets Mahalakshmi at a marriage event. Thereafter the dramais stretched without any valid reason, making it a tedious exercise.The director has relied too heavily on clinched points to move thestory forward. Predictability is what bogs the film down to a majorextent. However, the saving grace is the timely punchlines and comedyby Rajesh, Bhramaji, Prudhvi and Prabhas Seenu, which keeps theviewers entertained. The writer-director even left the major pointsaside, as no one cares about Mehreen post the attack on Ramaraju’shome. Even when Nani says Mahalakshmi is kidnapped, ACP Srikanth neverreally worries about her. Even Mehreen never worries about the reasonwhy the kids are with Nani or worries when someone tries to kidnapthem. The script in the second half is below average. Barring theclimax, which is deftly executed.

Director Hanu Raghavpudi done a decent job in the first half, butfails to maintain the tempo in the second. Music by VishalChandrasekhar is alright, although the impact is diluted thanks to toomany songs in the second half. “Nuvvante Naa Navvu” is the best amongall the tracks be it situation wise or execution wise. Backgroundscore sharp enough to keep you interested. Cinematographer Yuvraj hasdone a decent job. Stunt master Vijay deserve a special mention.Dialogues are well penned at places. Editing of the film is passableand the second half needs some trimming. Production values of 14 ReelsEntertainment are alright.

Krishnagaadi Veera Prema Gadha is just a traditional formula typerom-com film, which can be enjoyed by those, who love to watch suchsubjects especially, “How a coward handles his lover and her powerfulfaction background”. Isn’t that an outdated subject now? Anyways,there is nothing wrong in presenting faction comedy for a change. Allin all, KVPG is a decent romantic drama told with some fine comedy andgood performances that is without doubt. A decent Valentine’s Day