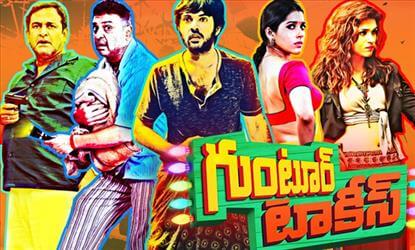 Hari (Siddhu)  and his old aged friend Giri (Naresh) were pick pocket thieves. They used to do small robberies and burglaries for their daily bread. Suvarna (Rashmi) also hails from the same village. Hari gets attracted to Suvarna as she reveals her 'Oomph' factor on most of the scenes. He starts to do naughty things in order to win her love again. And the way he tries to win her love is nothing but 'Audlt comedies'. In this case, once they decided to rob a big rowdy house in the village. His name is Jackie (Mahesh Manjrekar). And during the robbery he finds out who attempts to rob his residence. He tries to brings them down and they tries to evade him. And did they survived from that ? Did Hari joined hands with Suvarna ? forms the rest of the story.

Anchor Reshmi Gautam is definitely doing a memorable role. She has all the potential to be a B-grade actress. The way she wears half saree in 'revealing' mode itself spices up the scene. Shraddha Das has done a role of her life time. Even though her screen space is limited thatn Reshmi, she has done her best. 'Revolver Rani' will stay in our hearts. The movie will be a bench mark in her career. The lead actor Sidhu has tried something in comical role. But he still needs to better the performance a lot.

Technical wise the movie is having low standards. Be it the Production values or the cheap lyrics/dialogues. Can't believe Praveen Sattaru who won National Award for the movie Chandamama Kathalu has wrote script for this movie. Even though the movie is entertaining, the adult jokes will definitely make family audience to stay away. During an interview Sattaru said that his responsibility has increased 3x times as he bagged National award. And as he said, apart from the adult comedies, the screenplay is fast paced and it is a complete comedy caper. Even the antagonist Mahesh Manjrekar character has been shaped funny. Sricharan's Music is pretty sloppy. However in background score he picks the momentum. Dharmendra's editing is crisp and it keeps the momentum running. Ram Reddy's Cinematography captures the assets of anchor Rashmi perfectly. Be it 'Top-Angle Cleavage' or 'Bottom-Angle waist', the camera perfectly catches it.

The movie already bagged 'A' from censor board and as expected it is a clear cut Adult comedy. However the movie has its moments in second half. Reshmi Gautam's glamour is the biggest positive factor and next to Reshmi is Shraddha das. She looks completely different as Revolver Rani. Lakshmi Manchu too did well. However this movie is not suited for family audience.