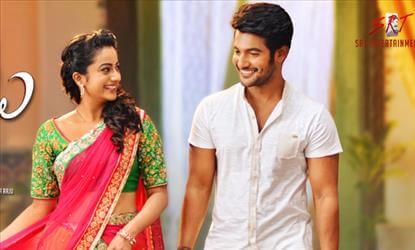 'Chuttalabbayi/Chuttalabbai' is yet another romantic flick featuring Aadi and Namita Pramod in titular roles. Veerabhadram shapes the project and S.S.Thaman has composed music. So let's see how the movie has shaped up ? Babji (Aadi) is a recovery agent and he comes across a girl Kavya (Namitha Pramod). She faces a grave danger from her own family and Babji helps her from this crunch situation. But at this juncture, Kavya's brother (Abhimanyu Singh) believes that it is Babji who is behind all this and he starts chasing the couple. As Babji runs out of options, he brings Kavya to his own village and he introduces her as best friend. Kavya slowly falls in Love with Babji. When everything goes as planned, Kavya's family attack Babji's family with help of another gang. Rest of the story is all about, how Babji solves the problems and gets into happily ever after with Kavya.

Coming to performances, Aadi who is desperate to give a hit has given a decent performance and he has improved his screen presence. He also has changed his acting skills. But still some thing is lacking in him. Sai Kumar doesn't have much to offer. But he brings more depth and intensity during second half. Once again 30 years pruthvi saves the movie during comedy scenes. He handled it so well. Posani, Ali and Raghu Babu manage were okay with their hilarious jokes here and there. Female lead Namitha is just a showcase doll. She is beauty and that's it. She is stone faced for most part. A better heroine could have elevated the movie's prospects. Athletic achievement

The movie is funded by 'Rose Telugu Movies' banner. The trailer of the movie received some strong criticism as most of them felt actor Aadi has insulted 'Reddy' community. However we feel that is also unnecessary to the script. Venkatesh Talari has produced the movie on a decent budget and the movie has lived up to it. Production values are quite decent. S.S.Thaman has given some average numbers and sound background effect. However the biggest drawback for this movie is the storyline.The story is ages old and beaten to death screenplay makes the characters too weak. The first half seems far better compared to the second half. Also the female lead is too weak. Some profound artists would have been an added plus to the movie. Cinematography is pretty decent and the village is shown in some natural lightings and that enhances the atmosphere. Veera Bhadram is just getting pass mark in direction department. He should have focused more on second half to make things more interesting.

The first half of the movie is watchable and second half is too shallow and it tests our patience. The movie doesn't offer anything new with an outdated story and beaten to death screenplay. The few jokes here and there evokes smile on audience. Female lead is too worst. S S Thaman has done his job and cinematography is awesome. Nothing else to brag about. If you have ample time to kill, watch this one on theatre.