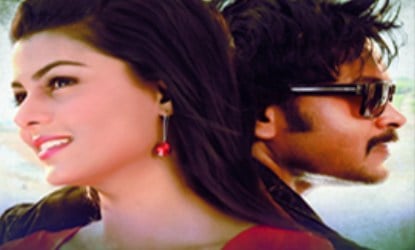 What Is Bad: Characters are not established properly, Logic-less screenplay, Rahul Venkat performance, No entertainment values, Transition of the story is bad, Stretching a short story long and forced quotes.

Boring Scenes: Too many.

Watch It or Not?: Alias Janaki neither impresses nor arouses interest with hardly anything new to offer.

Janakiram [Rahul Venkat] comes to Hyderabad and works in Greater Hyderabad Municipal Cooperation. He comes across Chaitra [Anisha] through an incident and falls in love with her instantly. Meanwhile, local goon Maisa an illegal land grabber plans to possess lal nagar lands but Janakiram opposes the illegal attempt. Things takes a huge swing around Janakiram when his higher official Tanikella Bharini joins Maisa and plans to counter Janakiram to help them possess lal nagar lands. To fasten land grabbing Maisa burn the lal Nagar area with the help of his brother Panda and takes support of government officials, police. Janakiram comes to know about this and decides to teach all of them a lesson. What happened to Janakiram love story? Did he got successful in stopping the lal nagar land get grabbed to Maisa? Has to be seen on the silver screen.

Debutant Rahul Venkat (nephew of Megastar Chiranjeevi) looks a below average actor who seems to have strictly done what he was shown to do.  He has done nothing new or out of box impressive acting and top he carried single expression most of time, he has long way to go in terms if acting. Anisha has given her full effort in a poorly written character and she looked charming in her limited scenes.

Naga Babu Characterization is the clinching impairment of the knowledge of the Mega artist. What was a pathetic characterization made worse by poor acting. Sri Ramya looks jaded but her acting was neat.  Tanikella Bharini is okay in his character. New villains look efficient, but their characterization is poor. Other characters either over react or amateurs who are poorly handled by the director.

The problem with director Dayaa's film is that, it has a weak script though the routine storyline is drilling. Even the film was made to look like a classy one, once in a while it incorporates unnecessary aspects. Dayaa has failed cent percent in direction with his snail moving and logic less screenplay.

Shravan BGS is effective and "Kadal Prema","Koncham Koncham", "Maarinade " are soothing onscreen & rest of the songs failed to make any impact. A few different perceptions where thrown into the screenplay which looks forced. Sreejith Sarang editing was neat, but he could have trimmed the film a bit and made the screenplay racier with the arrangements of scenes. Cinematography by Sujith Sarang is one of the best thing in technical team and production values of Sangamitra Arts are fine.

Alias Janaki touted to be an action entertainer that triggers moral revolution, movie has created expectations with its stylish presentation in posters, trailers and audio. The major grinch in Alias janaki is screenplay which is unelaborated and muzzy with scenes and characters popping out at the convenience of the scriptwriter. It was difficult to sustain interest in the course of 105 minutes. A couple of dialogues like "Duty annedi itharulakosam chesedi kadhu, commitment tho chesedhi", "Yeduti vadi balam swardam avuthe nee balam niswardam avvali" were crisp and witty but they are far in between the screenplay. A few different perceptions where thrown into the screenplay which looks forced. Also movie has no entertainment value with contents which are intended for entertainment failing to live up to it, songs picturization is a case in point. One of the best albums so far this year ruined by very ordinary picturization. On the whole, Alias Janaki fails in evoking viewer's interest in the first half with it's routine storyline, non-linear screenplay only to taper off in the second half with loads of easily guessable sequences vitiating the impact.

Bottom Line : Alias Janaki neither impresses nor arouses interest with hardly anything new to offer.