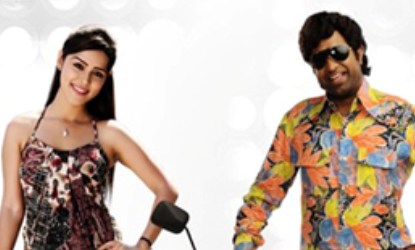 What Is Good: Priyanka CHabra Oomph Factor and Couple of Comedy Scenes

Watch It or Not?: Stay Away to Stay Alive

A happy-go-lucky Govindaraju (Vennela Kishore) loves roam on his ancestral scooter. His father-in-law rejects him due to his irresponsibility and Govindaraju challenges with his father in law saying he will marry a prettiest girl than his daughter. Govindaraju leaves to Hyderabad and meets Lucky (Priyanka Chabra). Govindaraju falls in love with her and gets married with Lucky. But things turn around when Lucky keeps a condition. what’s that condition? Will Govindaraju succeed in that conditions form the crux of the story.

Vennela Kishore is adequate as Govindaraju; his body language did not suit the role. His get-up is also bit awkward. Priyanka Chabra is very artificial in her expressions. She did liberal exhibitionism as well. Thagubothu Ramesh Comedy is funny in parts and Dhanraj is average in his character. Rests of the characters are not even worth mentioning.

If a major technical team is successful in making a film it will turn a moderate product at Tollywood box office,. But here other than cinematography every technical department fails to even make a mark. As the major points are revealed in the first 5 minutes, there is no story to narrate in latter part. Screenplay of the film is erratic. Writer Jagdeesh has failed in connecting audience with a fun and interesting script they expected from this movie. There is nothing to write about Director. Only plus point of the film is Cinematography. Photographer gives his best irrespective of composition of the film. Dialogues are mediocre in parts. Music is average. Editing of the film is horrible. Choreography is bad. Production Values are okay.

There's nothing wrong in comedian turning actor, but its important to select a promising subject for this kind of turn around. Vennela Kishore failed in directing a movie and now he fails in making his mark as an lead actor. Athanu Aame o Scooter is all about the happy go lucky youth. There is inherent honesty about the cinematography for sure, but even then it barely affects you with a shaky script and the narrative style is a tad too old. Much of the sequences lack continuity and director Lakshman has made a mess of the whole film which tests your patience all the time. There is nothing unconventional in the film other than the title.