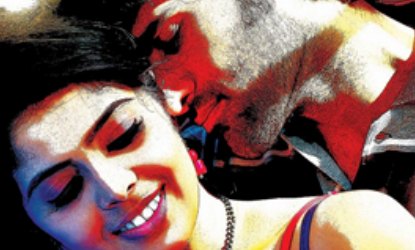 Akash (Rahul), works as an Asst. Manager for Celkon mobile company, Vizag. He is totally insecure and possessive guygets attracted to Meenakshi (Shravya) who is complete opposite to Akash. Both Akash- Meenakshi get committed to each other and get married against their parents will. Soon after the marriage Akash gets promoted as Manager to Celkon Hyderabad region. But things start to crumble in the life as Meenakshi starts working for a software company. Akash starts getting insecured with Meenakshi’s jovial behavior with office colleagues. The rest of the story is all about how Akash learn about trusting partner from the incidents in his life.

Now it would be fun who should walk away with the prize for the worst performance. It could have been anyone from the lead cast to supporting cast. Rahul is pretty ordinary in his character and it never helps the film in any way. Shravya come up with a rather okay show at best. There is less of sexuality and more of vulgarity in the appearance of Shravya. The rest of the cast has limited roles to play.

The storyline is basically simple focalizing on how marriages are bust up because of insecure behavior & Possessiveness of the partner. With a script that could be used to teach wannabe film makers on how not to write a movie. Govi tests the patience of the viewer with a dud show. There is no credible storyline and the director seems to have added sensual scenes, songs and melodrama just to add the length to the film. Jokes fail to evoke laughter, the dialogues – lyrics make you cringe, the pathetic expose – songs add to your woes.

Cinematography in the film is mediocre. Background Music by JB is too loud for a romantic entertainer. Production values in the film are adequate.

If you analyze Love U Bangaram with a bit of patience, it has a plot that could have been much better if narrated in a more disciplined and trendy way. But director goes with cockeyed narration, with too melodramatic scenes, irritating songs and boring preachings.

First half of Love U Bangaram is horrible, second half goes on the same way. This movie makes us wonder how the director convinced the producer (Director Maruti) to invest in this zany film.

Finally, Love U Bangaramattempts to be trendy approach on possessive and insecured behavior in partners but ends up as a rookie, wiggy attempt. Watch at your own risk please.