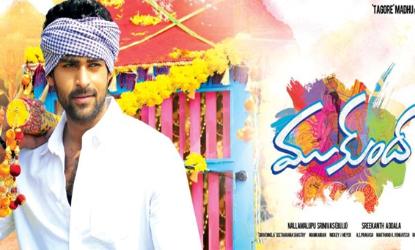 Cinematography,SongsCinematography,SongsCharacterizations,Direction,Song Situations,Editing,Story,Formulaic ScreenplayMukunda (Varun Tej), a good Samaritan, helps his friend in eloping with his friend’s girl friend, who in turn is a sister of local corrupt municipal chairman (Rao Ramesh). Arjun is always on run to escape from Rao Ramesh’s brothers, and Mukunda always there to rescue him from the goons. In this process of helping his friend’s love, Mukunda gets attracted Pooja Hegde who is younger daughter of Rao Ramesh. Once again election time arrives, Mukunda spoils Rao Ramesh’s plans and makes Prakash Raj nominee for the ward elections. Then this tends to climax. Will Arjun marry his girl friend? Will Prakash win over Rao Ramesh? forms the rest of the storyline.One more star son debuts in Tollywood, Varun Tej, son of Megabrother Naga Babu. Varun tries hard to deliver an honest performance, but doesn’t convey the various moods with much eminence. He uses his mediocre set of expressions in his limited repertory. Pooja Hegde looks million bucks, but her acting needs to get polished. She isn’t bad, but needs to be much better. Rao Ramesh has done justice to the role of a doting father and a corrupt politician. Prakash Raj other than giving fact quotes has nothing much to do in this film. Paruchuri Venkateswara Rao, Nassar, Staya Dev, Raghu Babu and the new comers are confined to small roles and their characters hardly offer anything substantial to the story that has loopholes the size of lunar creators. Even poor writing and lazy direction let them down.The story setup will give you a feeling as if you are watching a film which was completed in the 90-00s but released in 2014. Director Srikant Addala is sincere on his part, the screenplay is not befitting the premise of its lead characters. Mukunda doesn’t have the required depth to take the story or the characters parts forward with its narrative.

If the plot sounds clinched and bears similarity to the dozen Tollywood commercial entertainers, you will be even more surprised or should we say shocked with the twist given to the tale in the Interval. And it does! After the interval, the twist shown elevates the narrative to a great extent. Just as you feel Srikanth Addala has finally steadied the sinking ship, it plumps and again goes awry. The hurried climax doesn’t help. Though the screenplay and the overall treatment are easy on eye, it’s the immatureness with which the lead characters are dealt with that makes the outcome look disjointed. The graph of the narrative is low as the film begins and is the same till the intermission. Just like Pooja Hegde’s character. You desperately want the film to get better till the end. The dialogues are spectacularly inipid. “Vadi chhuppulu artham avvali ante vache janma lo ammalia puttali”, “Bus-lu manashulane kadhu vala ashalu korikalanu kuda mosthayyi”.

As far as the film’s music is concerned, Mickey J Meyer’s compositions are soothing, but the songs are not appropriately placed – Goppikamma and Chaala Bagundi being particularly hummable. The cinematography is neat. The locales add too much of freshness and supports the film in giving that ultra cool look. Film is totally dragged in the second half, editor could have easily trimmed of 15 minutes odd. Production Value of Leo Productions is good.After watching this fresh faced romantic entertainer Mukunda, we are almost convinced that Tollywood commercial film will be made only on one same old formula. Every director who attempts at rom-com will have to use that basic formula to make a happening love story. This film is no exception. The director’s nuances about love stories are very clear. From what he has made in this film, one can easily figure out what exactly he was trying to make. But its different point that he have missed to catch the bus by couple of feet.

Mukunda has its moments in its initial scenes, but gets very boring post-intermission. The drama between the leads never builds up, nor does the story agrees to step ahead, resulting in a below average film, thanks to few songs! Watch it, if you really have to.