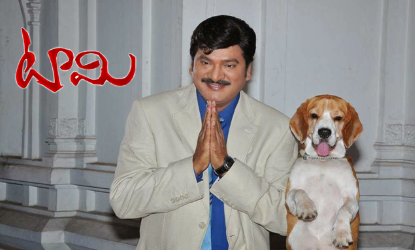 Rajendra Prasad , DogRajendra Prasad , Dog Emotion less characterization, Flat Narration, Forced extentions to the script, Loud BGM, Dragged Climax and EditingVishvam (Rajendra Prasad)is a physics professor in Jogaiah Institute of Technology & Sciences college of engineering in Narsapuram. He is living with his wife Seeta and his daughter. One evening he finds a small puppu who seems abandoned. Vishvam brings him home and tries to keep him in house against Seeta’s will. But she refuses to let him keep that puppy in house. Vishvam tries hard to find if someone can buy that puppy or if its real owner claims for it, but no luck. After seeing Vishvam’s love for that puppy, whom he have now named ‘Tommy’’, Seeta also agrees to have Tommy in house. Vishvam whose fondness keeps growing for Tommy, tries to teach Tommy a few things which normal dogs do, but Tommy being different only does things which he feels like doing. Vishvam starts taking Tommy daily to the station and Tommy on his own goes to station to receive Vishvam. Their bond of love becomes stronger every day. Suddenly one day, Tommy does not want Parker to go to his duty and tries to stop him home and at station too. What happens next forms the rest of the storyline.The performances in the film are fine. The trained dog essaying the role of Tommy was gorgeous and full of expressions. Natakireeti Rajendra Prasad excels in the role of professor, who feel very compassionate for the Tommy. Rest of the cast Seetha, Suresh, L B Sriram did a fine job as well. Venu Madhav and Raghu Babu failed to tickle the funny bones. Minugurulu fame Deepak Saroj has given a middling performance in his limited character.There's no loyalty as pure as that which a dog offers his master. Their love is infinite, constant and unwavering, true and steadfast. Tommy based on a real story, is the tale of the most faithful and devoted dog of all, Hachikō. This is actually based on a true story except it happened in the 1940s instead of in the present day as shown in the Telugu version. The true story doesn’t translate well to Telugu culture or modern times. It has the potential to be an amazing, inspiring film, but its falls way short on all fronts. Movie tries to impart an local sensibility of animal as individual that doesn’t work in a present-day setting. If the maker Raja Vannam Reddy is going to take the fact based story as the bones of contemporary film set in a completely different country, then he needs to elevate all aspects of the story to match. Thea screenplay is ultimately flat to match the characters. The daughter makes an impassioned plea for the dog to stay, telling him how much they love him and want to him to stay and in the next second she says, good bye and opens the gate. Okay, so the premise is the dog needs to do what the dog needs to do, but that like saying a teenager should be allowed to do what he/she feels like doing. It doesn’t make any sense. And then after a decade Vishvam’s wife shows up at the station ten years later to visit husbands grave, her interaction with the dog is banal. The original version has reached the level of that inspirational, life changing synopsis it claims to be. First of all there is no rule wife can’t be attached to the dog and love it, and still have the animal primary loyalty be towards the husband. Many animals bond much more with one family member. Creating a character who comes across as not caring for the animal her husband so loves, leaves the viewer wonder what he saw in her in the first place. Its contradictory to love.

Coming to other techinical stuff, Direction by Raja Vannem Reddy is not upto the mark. Music by Late Chakri is fine. How ever i felt the bgm too loud for a sentimental drama. Cinematography of the film is alright. Similarly the locales are nicely blended in the film. Thr production values of Babu Pictures are average. Editor could have easily trimmed down the film by 15 minutes in the second half. Tommy is a sorely lacking in drama and genuine emotions, movie is mind numbingly dull because there is no genuine humour or plot progression and everything seems to fall into place too conveniently. But the point here to be noted is that what Hachi (2009) does to you in 93 minutes, Tommy is not able to give you even ten percent of it in its 110 minutes of duration.So we should seriously consider this difference in order to come up with atleast fifty percent of the original inspiring movies with some added native touches. Overall, Tommy remains as one of the most underworked and lifeless inspired movie in recent times.Rajendra Prasad,Seetha,Raja Vannam Reddy,Chegondi Hari Babu,Bonam Chinna Babu,Chakri.One more freemake bites the dust