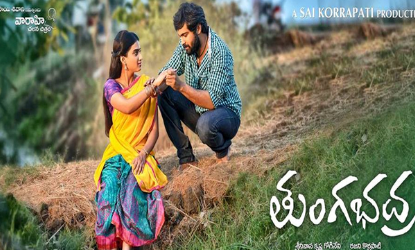 BGM, Message , CinematographyBGM, Message , CinematographyOld Story, Predictable Script, Dragged Narration, Characterizations, DirectionSet in a village called Tadikonda in Andhra Pradesh, Sreenu (Adith) a happy go lucky guy in village and a loyal sidekick to the local goon Ramraj (Satyaraj). He spends most of his time doing the works of Ramraj and takes revenge on the people who killed his father. At this time, Ramraj gets to know that his daughter Gowri (Dimple Chopde) is getting close to her collage mate Chandu. Sreenu takes the responsibility and clears the clouds regarding her relationship with Chandu, but unknowingly he gets attracted to Gowri. Story turns around when Kota Srinivasa Rao wins local elections and brings back the blood thirty Trimurthulu sons to village and they start taking revenge on Ramraj. Will they succeed to take their revenge? What’s their revenge with Ramraj? What happens between Sreenu and Gowri? what obstacles will they face to protect their love forms the crux of the story.Adith is fine in his new look. But when it comes to romancing and acting, Adith doesn’t go too far. It isn’t that bad but lacks a certain level of easiness in it. Dimple Chopde is good in her role. She conveys a lot through her eyes and essays her part with proficiency. Satyaraj was revelation in a film that is otherwise a very middling stuff. He isn’t fantastic but quite worked as one of the brighter elements in the film. The supporting job by Pavithra Lokesh, Kota Srinivasa Rao, Chalapathi Rao, Rajeswari, Shiva Ramakrishna and Ravi Varma don’t have a role big enough to get classified as memorable. The forced comedy by Sapthagiri and Dhanraj failed to tickle the funny bones. In the meantime, Jabardasth Sreenu got something special and different fun that will crack you up in his limited character.The story of Thungabhadra is very age old stuff. The film offers a mediocre material in its initial 20-25 minutes, when all the characters are being introduced and the narration seems to be fine. But after those initial moments the audience keep waiting for some twists or entertaining sequences in its basic storyline which refuse to come and it’s all goes on at a very uneasy pace. As a result, all those wyrd but amusing mannerisms of its several characters gradually turn into insistent, farcical and bothering leading to an evitable mess.

The debut director Srinivas Gogineni is unconventional and his lame narration not only lets down the hearty effort of Satyraj, but also affects the brand name of Sai Korapati presenting the film as producer. There even quite a few loopholes in the film, like the Trimurthulu sons stay outside the village for many years to take their revenge on Satyaraj, but they never attack on him till their representative wins elections. In the initial part of the film, Satyaraj and his followers survive a bomb blast which blasts on them. There is no reason showcased, about why did Ravi Varma support his opponent team to kill Satyaraj. (Spoiler) No one really cares about Pavithra Lokesh’s death. With so many holes, director gives an open ending to the subject with message (But that doesn’t make a sense as Satyraj followers still on fire to kill the opponents and the meantime, antagonists trying to kill everyone supporting Satyraj). The major issue with Thungabhadra is it deviates from the original plot and the episodes between the lead pair itself are slow. Then there is over-dosage of action and no wonder the movie was given “A” certificate. When the entire episode moves to revenge, we start seeing the shades of few other films. The placements of the songs are good, but not even a single track impresses us with its picturization. Musician Hari Gaura music is mediocre, while the BGM is good. Editing of the film should have been crispier. Cinematography by Rahul Srivasthav is one of the major assets of the film. Dialogues in the film are catchy. Production values of Varahi Chalana Chitram are all right.Director Srinivas had a tough task to extend an hour long story into a two hour film and he fills the space with lots of unneeded jokes and over the top characterizations. Over the top isn’t inevitably bad, but it has to be good enough for the viewer to deluge into it completely and this film fails to achieve that. So instead of enjoying the characterizations, we start laughing at them and it’s very difficult to slot Tungabhadra into a genre. There are strains of drama, romance, comedy, action and the derisory in the film. What it doesn’t have is something that binds all of this together. Director makes an outré mash-up of several genres and ends up with a film that doesn’t do justice to any.Adith Arun,Dimple Chopde,Srinivas Gogineni,Sai Korrapati,Hari Gaura.Tungabhadra – Leaves No Impression.