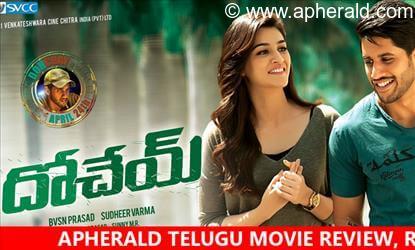 Dohchay is a film about an expert swindler Chandu (Naga Chaitanya) a small time crook, who sets up a mechanic shed in the city and does the con stuff with his friends. But Chandu falls in love with medic Meera (Kriti Sanon) and wants to get rich quick to save his father from sentence and make his sister a successful doctor. Then the gang steals from the men who belong to the gangster Manikyam (Posani Krishna Murali) and the recoil is instant. That’s when he pens to take revenge on Manikyam for his mistake in chandu’s life. He approaches Bullet Babu (Brahmanandam) for help. Chandu gives him both promise and a complicated plan to clean out Richard (Ravi Babu). This is where the problem lies. The scam is too big to be believable, requires too many people, several conjunctions.  And just plain fainéant writing that presumes that a don is as powerful as Manikyam is an idiot.

Naga Chaitanya is a fine actor but he isn’t investing his best shot in this film. He seemed a constrained, delivering dialogues without much piquancy in most part. Kriti Sanon looked exceptionally beautiful. The lead pair looked good on screen. Posani Krishna Murali delivers an earnest performance but can do little to make Dohchay entertaining. Ravibabu is an actor wasted in the film. While the potential of the actor comes across only in a scene or two in second half, for most part his nuanced acting is not appropriately used in the film. Brahmanandam, Viva Harsha, Sana and team did their part.  Rao Ramesh is okay in his short role. Similarly, Pooja Ravichandran is adequate.

There have been many films in Tollywood, which have followed the conman format in stories. Dohchay is along the lines of the 9211 (short film), Raja Natwarlal, Ek Khiladi Ek Haseena, Love Actually, Run Raja Run where we see the slimly bad hero doing thing the way to set things right. Sudheer Varma, however doesn’t manage to balance all the aspects of this conic film. Dohchay starts low on momentum and even hurried climax sequence can’t scavenge everything. This doesn’t cover all the important bases and even an promised sense of direction by Sudheer is not quite enough. Dohchay, therefore ends up being a much lesser film that it could have been. It could have been reveled a lot more; had the con been made more entertaining and loopholes been less in number.

The script of Dohchay is chivvied with loony writing. Its an ordinary script that divulges almost nothing to the audiences. The big plan of bringing down a policeman and a gangster is something the film at no point lays out for its audience. Its done to easily, too handily sans any cheekiness. It offends viewers how lightly the story is taken. The is no thrill, no condemnation and no maven in the story which strives to attain even averageness. The romantic track works as a distraction more than a part of the story. It seems frequently that when the plotline begins to go awry, the writer fit in a song out of the blue or needless romantic moment.

Other technical aspects of Dohchay are decent but they don’t shine through. The editing is good, but the flow is missing. The cinematography by Richard Prasad is one of the major assets of the film.  His framing actually elevates action scenes and songs. Music by Sunny MR is good. And the background score is engaging. The editor Karthika Srinivas could have moiled out a miracle with his editing, a factor that is responsible for the film hauling. Dialogues of the routine and the production values of SVCC are grand.

Dohchay is a formulaic film lifting its formula from various films. Director of Swami Ra Ra teams up with Naga Chaitanya and ends up giving us a stretched rehash. So there you have it. A flimflam flick necessarily has to do a couple of things, it has to have some thrilling moments and it needs to be funny. On nether of these counts Dohchay comes up as trumps.