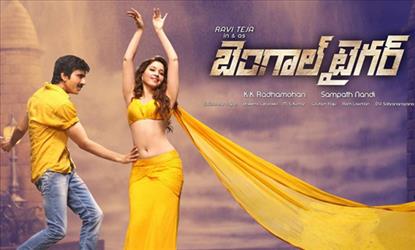 Plot wise the film is a combination of slapstick comedy and revenge drama.The whole film revolves around situations created by the characters in an effort to entice other characters into suspicion identities. A happy go lucky guy Akash Narayan (Ravi Teja) becomes heart broken after being rejected by Aksha in Pelli Chuppulu. As she wants to get hitched with someone famous and Akash pith to become one. To become successful in short time Akash plays grinch in a political event. Impressed with his weird reasoning, Minister Sambhu (Shayaji Shinde) cleverly allots Akash a job. That's when he meets Sharddha (Raashi Khanna) and starts impressing her. But things turn around when Home Minister Nagappa (Rao Ramesh) accepts Raashi's love with Akash. Will Akash accept this proposal? Who is Meera (Tamannah)? Who falls for Raviteja? This is fun so don't expect us to spoil it.

Mass Maharaj Ravi Teja carries the whole film on his shoulders with bundle of energy and mass mannerisms. He also comes up with some nice one liners here and there. But the best thing about him in the film is how he uses his body language to his benefit. It was good seeing some details like the way he sits, gets up from the chair where he is interacting with the chief minister or the way he deals with Shravan in the fight sequence. The scene where he Ravi Teja - Prudhvi discuss about a real life story was also a good one. Raashi Khanna and Tamannaah Bhatia were good, but there was nothing for them to do in the film. Raashi Khanna actually impressed more than Tamannaah in her act. The worst part is that they were never justified in the film. Rao Ramesh and Shayaji Shinde are doing political characters for the nth time, nothing special to mention about them. Boman Irani plays the villain and gives a thumping performance. Posani Krishna Murali, Satyam Rajesh, Shakalaka Shankar and Prudhvi comedy is clinched and fails to click.

The story of Bengal Tiger is as thin as half a wafer and is made of such non-happening events that you would wonder how all these came to be stitched up together into an even more ho-hum script. As the interval comes you keep your fingers crossed and desire against desire that things will get better, but then Sampath Nandi takes us on a nose dive with some irksome sequences inspired from Kandireega, Don Seenu, Attarintiki Daredi, Anjanelu, Adurs, Arjun, Racha..etc. As Bengal Tiger heads towards the climax, the film maker brings in some forced comedy and dragged fight sequences. This disjoint sequences gradually gives way to annoyance and at times even anguish as goofiness is celebrated to the core.
Bengal Tiger claims to offer good masala entertainment with romance, revenge and drama to its viewers and when it fails to score on all of these one realized that the miscues that it makes entirely need to be credited to its flawed and inspired script.The question remains as to what it is that prompted a director like Sampath Nandi to attempt a slapdash rehash of Racha. Is there a tremendous paucity of plot-lines in Telugu that an upcoming director chooses to return to a once success formula that in itself was a sort of inspired.
Any ways, this does prove few point things. It demonstrates how a movie that has a running time of two and half hours could be cooked up from a story that was never there and it also confirms that you could get some of the best actors around for a script like this. For a commercial film, movie should atleast have a decent musical score. Its unforgivable that the film fails even on this count and the couple numbers that we get to see on the screen leave a lot to be desired. Even costumes were not upto the mark. Cinematographer Soundararajan must be given a lot of credit for making some underdeveloped sequences and songs look good on screen. The fight sequences shot with Phantom Cam are good. Choreography is not upto the mark. Production Values of Sri Satya Sai Arts are grand.

Goofy entertainment, thats what is selling in Tollywood at the moment. Thats why Sampath Nandi has decided to place a series of fatuities against each other, to make an incoherent mess called Bengal Tiger. This so called commercial entertainer suffers from generic storytelling, situational comedy and rarely raises above the fallible conception. All in all, Bengal Tiger is a kind of film that constantly remind yourself that there is a Sunny and beautiful world outside the cinema hall.