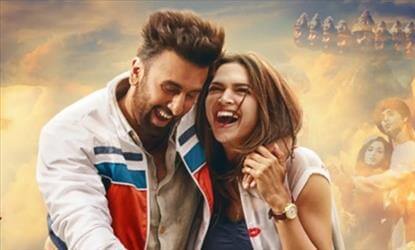 'Tamasha' is about journey of Ved (Ranbir Kapoor). Ved has grown up to listening love stories. He himself is very found of Ramayanam, Laila Majnu, Alladin and Romeo Juliet. But he feels that all stories same. His life gets a change when he meets Tara (Deepika Padukone) in corsica. He wants his story with Tara to be different. So they decide to not tell each other who they are, to only lie about themselves and after returning from the island to never meet each other again. But will they meet once again ? Watch out the movie in nearby theatres.

Ranbir is back with a bang and he has done an extra ordinary job as an actor. His acting is top notch and it would be under-rated to say that he has lived the character of Ved. This performance deserves award. Deepika is on a roll. She is a big asset to the team. What surprises us is the choice of selecting movies. She looks natural as Tara. There is a scene where she follows Ranbir and that will make you cry. The chemistry with Ranbir is something we all need in Bollywood. Javed Sheikh excels in the role of Ved’s father. Nikhil Bhagat and Faraaz Servaia also does a decent job. But this movie is just about Ved and Tara.

Imtiaz Ali has succeeded as a director. But the narration is a bit confusing at times. That may not be appreciated by everyone. The first half is completely sluggish and the second half is where the magic happens. The movie is high on emotional content. Lots of scenes are there which will leave us in tears. Anyone who has lived a dream, will connect to this film big time. A.R.Rahman has proved he is an Oscar winner. Safarnama and Agar Tum Saath Ho are mesmerizing. Irshad Kamil’s lyrics are another added plus. The picturizations are more refreshing. Cinematography by Ravi Varman is eye-candy. The visuals in Corsica are a real treat to eyes. Editing is kinda different. But it could have been crisper. The production values are the biggest asset and they are very grand.