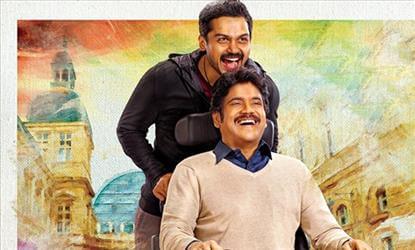 Seenu (Karthi) is an unemployed ex con who goes to the Aditya Mansionof a quadriplegic man to get proof that no one would hire him. ButVikram Aditya (Nagarjuna) hires him inspite of Seenu seriously wantingto find work. They have many differences. But wouldn’t you know it, itturns out that Seenu is precisely the kind of caretaker Vikram needsto loosen up and live his life again – and Vikram is precisely theemployer Seenu needs to show him some responsibility  so that Seenucan become a productive member of society. At first, Seenu seemshopeless, he doesn’t take the job seriously, and he spends more timeogling Vikram’s beautiful assistant Keerthi (Tamannah) than he doescaring for him. Vikram with his no non sense approach, his widefriendly smile, make everyone fit in. And while Seenu at first seesVikram as a stick in the mud – an upper class, out of touchhandicapped man gradually, he starts to see the real person underneath– the person who needs help.

Performances are the key here. Akkineni Nagarjuna fits in well withhis intense and laden persona. As a quadriplegic person and keepingunsmiling expression throughout that suits his character perfectly.Karthi is really great and it’s good to see that he is supportingventures like these on a personal level following the right path.Tamannah’s photogenic looks are captured quite lovingly so it’s not somuch a chore watching her glide through the motions of falling in lovewith a massy guy. Prakash Raj looked fine in role and performs welltoo in his few scenes and so does Jayasudha as Karthi’s mother. Ali,Tanikella Bharini, Late. Kalpana, Nicole, Shreya Saran, Adivi Sesh andAnushka Shetty all play their cameo kind of short roles effectively.

An official remake of the high-on-emotions French entertainer “TheIntouchables” featuring Omar Sy and Francois Cluzet, this desi take byVamsi Paidipally is a little more on the showy romantic side to bedeemed an emotional fun ride. Also there’s very little tension in theoverwhelming display of brawn and beauty so the overall enjoyment isentirely limiting.The fun element is strong enough in the first half, but the emotionalspectacle is not. Riding the touristy wave across the most recommendedholiday destination Paris, can only net you what is equivalent to acinematic rendition of city of love. The storyline lacks strengthmainly because after creating a few routine set piece love tracks, itgets bogged down in unviable vacuities. We have seen this kind ofstory before. Easy comparisons might be “Bucket List” or “Driving MissDaisy” but truthfully, this movie closely resembles the 1995 comedy“Houseguest”, but with an invalid not a wimpy father. Seriously thereare eerily familiar subplots in both of these movies.

The movie (based on a true story) comes perilously close to fallinginto the uneasy trap of massy-guy-saves-persons-prospective cinema,but it pulls itself back from that brink by focusing on dynamic of twomen. The success of the story is that neither one of them treats theother as inferior or superior, just different. And from that they botheventually appreciate the differences between the two and what theycan each gain. The opening scene between the lead actors through thestreets of Hyderabad only to fool the police by saying Nagarjuna ishaving stroke and needs a hospital is as much Nag’s high stake prankas it is Karthi’s. Neither man considers the others problemsinsignificant, nor do they ever treat them insurmountable. This VamsiPaidipally directed adaptation copy, is almost a frame-to-frameregurgitation of the original. While the exposition takes up most ofthe runtime, not enough is done to shore up either the set up or thefinal revelation. As a result it comes out a little too pat to be justifiable.

Hence following the same pattern, the solid usp of Oopiri is itssoundtrack with few fine compositions and lyrics. out of all only“Sithakoka Chiluka” sadly comes in the film just at the wrong moment.The cinematography of the film is major asset the way scenes are shotin songs and race sequences are fun. Editor could have worked a bit onthe second half of the film. The shoddy editing from the Paris tourdilutes the film’s impact. Production values of “PVP Cinema” are fine.

Telugu cinema has always been a difficult terrain for remakes as thestory lines structured for audiences elsewhere, often found itdifficult to gel with the tastes of our Telugu audiences. Even thoughthat is the case, the recent years witnessed a lot of remakes inTelugu, with very few of them making an impression among thespectators. “Oopiri” is the latest one to add to the list, and thisbeing the first of the adaptation made by the director VamsiPaidipally. So in all, Oopiri has a fine direction, good performancesand some well executed sequences too. But with nothing new to revealor surprise in its content for me its content, for me it just remainsa good one time watch and not anything more than that as beingprojected.