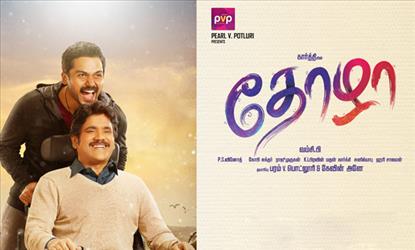 The most anticipated 'Thozha' gets released today and as Karthi said, the movie has definitely done justice to the role. This is one of the most funniest, most honest and touching films in recent times. Karthi is a failed robber and he is jobless. Nagarjuna is a romantic and melancholy mind trapped in a useless body. However Nagarjuna gave him job with a trial period.  Karthi is a slum guy who takes everything for granted. But his attitude pleases Nagarjuna. Karthi attempts to get Nagarjuna married once again. Does he succeed in his attempts ? Does the bonding between Karthi and Nagarjuna continue ? Watch out the answers on silver screen.

First of all all praises and accolades goes to Nagarjuna Akkineni. He deserves a bow. In his entire career, this has to be the best movie. Even though he has done role of a paralyzed millionaire, he isn't the typical sad sack. Next is Karthi. He is simply delightful. The movie has some priceless comedic moments and it also has an emotional side. Tamannaah as personal secretary for Nagarjuna is gorgeous and hot. She has been utilized to perfection. Prakash Raj, Vivek, Jayasudha have done justice to their roles. The movie has cameo appearances from Anushka SHetty, Gabriella Demetriades, Adivi Sesh and they are just like cherry on top. Nora Fatehi is just used for an item song.

Even though it is a bi-lingual flick, Director Vamsi Padipally has used separate technicians for both the languages. If Abburi Ravi has penend dialogues in Telugu, it is Raju Murugan who has penned dialogues in Tamil version. Similarly KL Praveen has worked on the editing in Tamil version. The running time is however a trouble. 153 minutes running time tests our patience. PS Vinod's cinematography captures the exotic locales of Europe. Gopi Sundar's music is catchy and they are soothing to ears. The team deserves an applause for making such a movie which has emotions and humour in right proportion.

This is an Amazing movie with good choice of actors and perfect locations. The acting is so natural and that gives a solid momentum to the story. The movie also shows the social differences which is prevailing. Vamsi's screenplay is just a masterpiece of comedy writing. On the flip side, editing has been so poor. It needs to be better, Crisp editing would have done wonders.