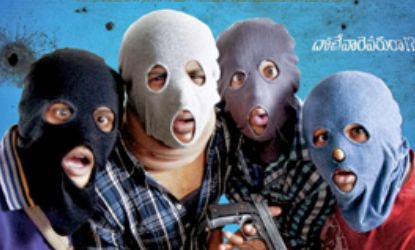 Four Friends (Sundeep Kishen, Varun Sandesh, Naveen and Rakesh) undergo financial troubles and plan D for Dopidi in an AP National Bank. They start P for Planning by watching F for Films and do I for Implementation by their research on the bank. On the day of R for Robbery plan gets a turn around when another group (Lead by Tanikella Bharini) gets into the bank. That’s when things take time and P for Police sourrond B for Bank. How did ACP Krishnama Charya react to the scenario? How did D for Dopidi gang turn H for Heroes in the end, forms the rest of the story line.

Sundeep Kishen has once again showcased his natural acting skill. Varun Sandesh who stands as a master mind in the film is promising. Compared to his recent performances it’s the best one. Rakesh is good in his role and provides the much required entertainment with his role. Surprising part of the film, Dev Katta as ACP Krishnama Charya. He is fine in the role. Rishi Mulla is fun-tastic in his role as Chevula pilli – script writer. One more director Raj Pippalla is okay. Tanikella Bharini and gang are adequate. Melanie Kannokada looks pretty in her role.

Storyline of the film is wafer thin, about of bunch of boys who plan to do a wrong thing but things turn around they turn on be heroes in front of their parents. Screenplay is miserably terrible, which don’t make audience stick to their seat. Movie lacked to narrate a heist story in a crispy way. Music by Sachin – Jigar & Mahesh Shankar is okay. BG music reminds us of Shadow, Shakthi and couple films scores. Cinematography by Lukasz Pruchnik is neat. Dialogues written by Siraj Kalla are funny in parts. Editor Dharmendra should have worked on the second half where narration drops down. Production Values in the film are good.

With a kind of hype given to movie from the teasers and proms as crime entertainer & bollywood producers Raj Dk producing it, the expectations were quite high but movie didn’t live up to the expectations. Strictly speaking, stories which revolve around robbery need some exciting thrills, intelligent twists and situations that should keep audience on edge of the seat. New director Siraj Kalla has simply wasted a decent concept with half back script and narration.

First half of the film is better when compared to the second. Only positives in the film are lead performances, couple of comedy scenes and first half. On the flip side Screenplay, dragged second half and climax tear the film apart. If a proper care was taken adding a proper mix of thrills, fun and interesting second half movie would have been definitely made the difference. But as of now, movie is not upto the mark.