What signals Modi sending to CBN,KCR? 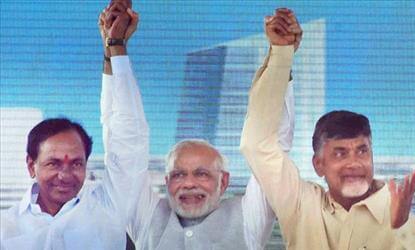 What signals Modi sending to CBN,KCR?

Many are wondering what singals PM Modi is sending to AP CM Chandra Babu Naidu and Telangana CM KCR. Generally political parties try to please their allies and coalition partners by giving them various rewards and awards and blasting their opponents.

But it seems PM Modi is following different yardstick. It is known that PM Modi is in coalition with Chandra Babu's TDP in state and centre. Chandra Babu and people of Andhra Pradesh expected PM Modi dlole out various freebies apart from special status to Andhra Pradesh.

But nothing happened and infact started receiving shock after shocks. At the sametime when Telangana CM KCR attacked PM Modi hurling choicest abuses, many thought Modi will not entertain them. But though Modi didnot visiit Telangana much, he started praising KCR and his schemes.

Chandra Babu however diismissed the survey fndings with the sources questioning “When all the schemes being implemented by the AP government got first rank, how can the CM be ranked fifth? Along with the schemes, the CM too should get first rank.” CHandra Babu himself said “Everybody is conducting surveys according to their whims and fancies”.  Many are wondering what's going on in Modi's mind.