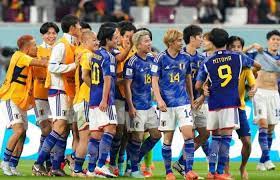 The series of vicissitudes continues in the FIFA world cup 2022 being played in Qatar. A similar reversal took place in the Group-E match between germany vs japan (GER Vs JPN) on Wednesday. The japan Football Team scripted the exit of the four-time world champion germany by defeating them 2-1 in the last 15 minutes thanks to a tremendous game. The German Football Team was leading 1-0 till the 75th minute of the match and completely dominated every corner of the field, but the Japanese players suddenly changed gears and scored in just 8 minutes. While scoring 2 goals inside, he got his team's name written on the victory.

The heroes of the Japanese victory became Ritsu Doan and Takuma Asano. Scored a goal in the 75th minute of the Group-E world cup match to equalize his team. After this, in the 83rd minute, Takuma Asano gave the team a lead through a brilliant goal, which the German team could not overcome. Surprisingly, both these players were not part of Japan's main attack. The coach tried him in the field as a substitute and his bet proved to be a complete success. The only goal for germany was scored by İlkay Gundogan through a brilliant penalty in the 33rd minute of the match.

Germany has now lost its opening match in the second consecutive FIFA World Cup. Earlier in the year 2018 too, mexico defeated germany 1-0. After this defeat, germany will now have to face an exit battle with another european giant spain in Group E.