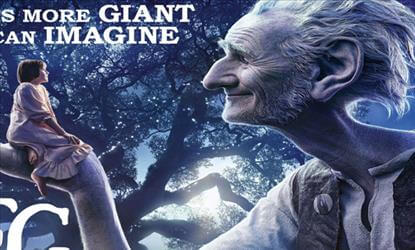 Disney's newest release 'The BFG' releases in theaters today. Once again Steven Speilberg has adapted a book and has managed to strike a balance between the visual narration and technical requirement. The movie opens with an Orphan named Sophie (Ruby Barnhill) and she is abducted by a gargantuan hooded figure. He creeps around streets of London. Soon she is taken to a land of wonder and spectacle known as 'Giant Country'.  Sophie meets her abductor and that is 'BFG' (Big Friendly Giant). Yes ! Thanks to motion capture technology, BFG role is spectacular and it is done by Academy-Award winner Mark Rylance (Bridge Of Spies). He is not just like other giants and his mission is to spread pleasant dreams to all Children. However there are nine other giants and they treat Kids as 'Snacks' and not human beings. However BFG treats sophie as his own daughter. His concern was the safety of sophie. What happens to the rest of the giants ? Will sophie be safe ? Watch out the answer on Silver screen.

'The BFG' is a visual wonder and Spielberg has done a magic on and off-screen. The biggest challenge faced in the movie is, the technical team needs to find a way to create actual giants using CGI and they have done it to perfection. The Giant's character personalities are found in their face and they done it right. The acting in the movie is just mediocre.  Mark Rylance tried his best but the acting from Ruby Barnhill just wasn't convincing at all. She is a young actress and she needs to learn soon. More than CGI, Prosthetic make up on real actors would have done a better job. Penelope Wilton as The Queen brings that upper English class to her role. ermaine Clement as the Fleshlumpeater provides enough menace.

The movie is technically solid and rich. But the emotional depth from the original version is missing here. But still the movie itself is inconsistent in tone, logic and visuals. Also the editing is confusing. The time frame of the fairy tale varies. The late Melissa Mathison's screenplay has many of the components of the book. It just doesn't have the magic that I expected from all the talent involved. The problem with this movie is, it's too 'Good', while the book was dark, gritty and in fact scary. Disney as always has touched lighter on the subject. We appreciate the positive spin Spielberg and Mathison put on it. Even the rest of the giants are just fools and they are not the people-eating giants to be scared of. The climax is too quick and everything is wrapped up all of a sudden. Despite all those flaws, the  relationship between the orphan Sophie and the Giant made the movie completely satisfying.

Disney's BFG was treated as a Kids film, but it never should have been treated like that. It is neither a Kid's movie nor an Adult's scary movie. It is a young adult literature which should have handled a bit more seriously. But still, the movie has all ingredients to make it as a blockbuster. Even though there is no need for comic relief, the screenplay has made it a necessity. This movie is like an Old Grandpa reciting a bedtime story.