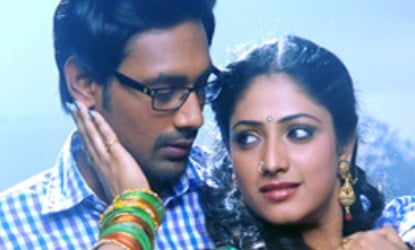 What Is Good: Sekhar Chandra Music

Watch It or Not?: Better Stay Away and rewatch Pretty Woman

A award winning young entrepreneur Sri (Varun Sandesh) depressed because "as he needs to marry KK (Ahuthi Prasad) daughter Anjali to cover his company losses". He is a too shy to mingle with females. When his friend Hrishikesh Mukherjee (Srinivas Reddy) makes Sri to stay with a prostitue Neeru (Hari Priya), to make his shy breaks loose in a gap of 10 days. Neeru makes him realise that girls are part of every man's life you need to cope with your fear, to enjoy the beauty around you.  Things change when Neeru breaks her own rules and continue her journey with a Sri (Varun). Meanwhile, Hari (Kasi Vishwanath) a contract killer starts killing every one behind a scandal to cover MLA (Benerjee) tracks. His last target turns out to be Neeru. Whats her relation with the Scandal ? Will Hari kill Neeru ? Did Varun marry Anjali (Daughter of KK) ? Forms the rest of the story line.

Varun Sandesh is alright as shy dude Sri. Varun Sandesh is becoming too monotonous with his mannerism and dialogue delivery. He could have been modulated his voice for differenciating fierce, sympathetic or drunkard.

Hari Priya has dominated the film and proved to be a better actress compared to her performances in films like "Thakitha Thakitha" or "Pilla Zamindhar".In "Main Hoo Na" song she managed to do the right use of whirlings to keep the mass audience edge of their seats. Kausha sizzled in an item song with minimal clothing. Dhanraj, Prudhvi and Srinivas reddy fail to tickle funny bones. Vennala Kishore is okay.

"Abbayi Class Ammayi Mass" a remake of Hollywood movie "Pretty Woman" starring Richard Gere and Julia Roberts. Screenplay development in Telugu to engage our audience is very predictable and very unimaginative. There is almost no realism in the movie and you are told Neeru is a hooker but there is no other evidence of that onscreen. You do not believe for a second she falls in love with Sri, there is nothing going on between them as far as screen chemistry goes. All of the drama is forced and immature.

Music by Shekar Chandra is Major asset of the movie. Manasulo na, Silk Cheera and Emo Emo are good on screen. Direction by Koneti Srinu is very cheap. Narration of the film is shabby. The dialogues in this film do not make any sense. The content of the dialogues does not have any relevance to the script of the film; "Neeru - Naadhi Mulla Daari Needi Puula Dari!! Varun - Gulabi Puvu kinda kuda Mullulu untayi, Neeru - Ee Logics naaku Cheppaku", "Pavala, Addarupai ki padukune ammayi la unnana ayidhu veelu unte cheppu", "Sakshi tv vachina shaksham dorakakudadu". Cinematographer by Sai Sreeram is mediocre, his zooming camera angles fail to elevate the scenes. Editing could have been little crunchy. Production Values of Lakshman Cine Visions are meretricious.

"Abbayi Class Ammayi Mass" may be an unrealistic, cliché-ridden story, a fairy-story in modern dress, but, like "Manmadhudu", it does not have some entertainment or emotional depth. The character played by Hari Priya was annoying as usual (Actually, even worse than usual) This romantic "Comedy" not only makes unbelievable plot, but also unbelievable characters and situation as well.

Except for songs and few dialogues, there is nothing good about this movie, everything is horrible, without any single redeeming value. All about it was boring and lame. This has to be the most boring, unimaginative, dullest romantic comedy made in recent times.