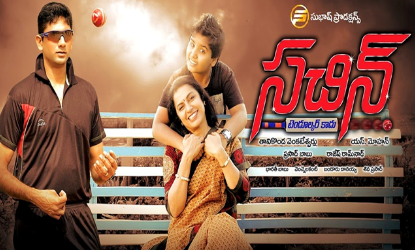 Message,Suhasini ManiratnamMessage,Suhasini ManiratnamDragged Script,Spiritless Narration,Direction,Editing and MusicSachin… Tendulkar Kaadhu is a film about autistic boy Sachin (Snehith), who wants to make it big in Cricket like Sachin Tendulkar. Sister Swathi (Suhashini) takes care of Snehith and rejected many marriage proposals for him. Things turn around when Sachin is diagnosed with Brain Tumor and accordingly is counting his days. Swathi tries to full fill his dreams through Cricket Coach Venkatesh (Venkatesh Prasad) by making him play in Interschool tournament. Will Sachin’s dream come true? How did Venkatesh train autistic boy for tournament? How did Sachin tangle with the real pacers and succeed in his dream forms the rest of the story line.The characters in Sachin are lively but their backgrounds are not written well. Suhasini and Venkatesh Prasad have interesting characters and play their roles well, but they hardly make a difference to the story. Master Snehith performance matches the mood of compounded anxiety. It is too weak performance to carry the entire film on shoulders. His dialogue delivery and breakdown scenes are plain awkward. The other kids behave like kids except for the one or two times that get all philosophical and reflective on the adults, evidently unnatural. Suhashini and actor in coach role are confined to their small characters.The story structure is pretty conventional in Sachin.. Tendulkar Kadhu. Problems are presented in the first half, and their closures are sought out post interval. The pacing was rather interesting, but ultimately a draw back. The problem are presented so subtly and slowly in the first half (though! Ends in 50 minutes) that you feel nothing has happened so far. As the last hour starts, you wonder how they are going to wrap things up in a short time. Of course they do bring a cloture to everything and have to clearly do it quickly. The film drags its one message point story to a boring length and ends on too idealistic note. Its unevenly paced bordering on being dull and rather boring at times. The whole, “Going to play the tournament and win it for the team” story gets arduous to watch in spite of a few enduring moments here and there, makes you feel like getting over with it sooner than later. The whole struggle of Sachin’s character fails to come across and you do not feel the pleasure of seeing him alive his last days with a smile nor do you feel the pain of seeing life leaving him slowly but surely.

The screenplay has its problems. The main character Suhasini Maniratnam, inspite of taking care of her autistic brother doesn’t really do anything for the treatment of autism/ tumor. The director meddles into symbolism that doesn’t workout and leaves the audience wondering what happened. The screenplay goes haywire. When all he needed was to create a source of inspiration, the director gets into fantasy and completes child’s desires, coupled with some miracles at the hospital. Sachin has fine on-location camerawork and one must mention the production design and overall look of the film. The editor could have applied his scissors more sharply, while the background score is simply awful and loudly overblown. The chants of “Sachin” as the boy enters ground are plain embarrassing, in particular. Sachin.. Tendulkar Kadhu story has the potential to strike vibes with cinegoers of all ages, but the script hovers between convincing and least convincing mode. For a film that is supposed to tug at your heartstrings, this one hardly manages to touch them and except for few moments, it hardly had any of the characters or situations to make an impact on you. Overall, Sachin Tendulkar Kadhu could have been about dream, inspiration and aspiration, instead it is plain mawkish.Venkatesh Prasad,Suhasini Maniratnam,B N Krishna,Thaikonda Venkatesh,Rajesh.This “Sachin” Fails to Inspire