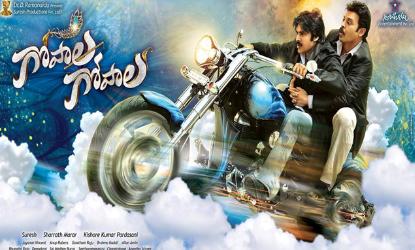 Pawan Kalyan, Dialogues, Concept, SongsPawan Kalyan, Dialogues, Concept, SongsLags in between, Failed to establish the point, Direction, Emotional Bonding between the lead characters, EditingGopal Rao (Venkatesh Daggubati), a astute businessman going to any limits for selling his goods (Idols of God) by minting up the godly stories with no personal beliefs at all in the existence of God. Then one day, his disturbance in a Krishnastami festival and its consequently becoming crowdless results in an earthquake which takes away just his shop in the whole city. His request for the insurance is denied by the company stating “Act Of God”! Now his only way to get the money is to fight the case. He plans to lodge a case against God for his compensation & send notice to all the priests, in his words, Salesmen of God’s offices. Rest of the film revolves around his simple lifestyle and his refusal to accept god’s existence.Coming to the star cast, Venkatesh Dagguabti has given a promising performance; he brought comedy mixed with some sensibility and courage. We could clearly see his belief and struggle yet his confidence let him down. Pawan Kalyan makes an appearance as Vasudev (God). He must be appreciated for accepting a supporting role, when he is being known as Powerstar of Telugu industry. Secondly, for playing God character. As its controversial & dubious whether audience will accept him as God or not. Keep it aside, He really doesn’t have big scenes, but that’s the whole point; god quietly watches and guides only when it’s required. Mithun Chakraborty as spiritual leader steals the show, and he is well supported by Posani Krishna Murali & Diksha Panth. Shriya Saran, Madhu Shalini, Ashish Vidyarthi, Murali Sharma and Krishnudu are confined small characters. Arjun Daggubati debut is fine.Gopala Gopala is actually developed from the play Kanji Viruddh Kanji by Bhavesh Mandalia in Gujarati was adapted into Hindi as Krishan Versus Kanhaiya, and then the play was converted into Bollywood film Oh My God! Starring Paresh Rawal, with due credit given to the original source a lesser known Australian film The Man Who Sued God. And if one has seen the same then he is going to give a mixed response to Gopala Gopala as it somehow reduced the impact generated by Hindi film. Reason behind, that in the Hindi film the proceeding just keeps moving. There are no separate songs - tracks to elevate actors, and here it’s more like Pawan Kalyan coming to save Venkatesh’s character than Lord Krishna. Oh My God! Always keeps stressing on the bonding of Husband-wife, Father-Daughter, Akshay Kumar-Paresh Rawal in its script. Whereas, Gopala Gopala tries to bring in too many points to impress viewers which take the focus away at times, which could have been avoided.

The director tried to add too many additional scenes which were not perfectly gelled well with the narrative of this film. Like extended shriya’s character, unnecessary fight sequence and the developed courtroom murder attempt (even then the culprit was not arrested). The dialogues by Sai Madhav Burra deserves a special applause, for his thought provoking lines like, Dhaari Chupinchadam varake naa panni, gamyanini cherukovadam mee pani; Baruvu chuse vadiki kaadu mithrama, moose vaadiki telusthundi; Samardhulu intlone undipothe asamardhule rajyamelthaaru. Director had an intriguing idea in hand – a man who is denied insurance claim because the demolition of his property was an act of god, decides to sue god. But he lacks clarity in direction. The director tries to repeat the same series of sequences to inject the character, the final act following the court judgment, appear as after thoughts in a narrative that goes to unbelievable lengths in the of fortifying credibility.

The narrative’s biggest failing is its tone. Its too suave and retiring to liven up the senses or curry interest there of. Every song in the film is situational and so you enjoy the Gopala Gopala music quite well with its storyline. Bhaje Bhaje is a beautiful watch (wait till the end credits to see the fanzy moments from that song). The cinematography and background score just serve the purpose well making a decent impact along with the minimal special effects to showcase God. Editor Gautham Raju could have been better with the scissors as the film, with a runtime of 153 minutes, seems a bit stretched. Visual effects in the film are not up to the mark and the Production values of Suresh Productions - North Star are grand. The first half of Gopala Gopala leave in splits with its humorous comedy in parts and the interval introduction of Pawan Kalyan make you believe that a good series of events are round the corner. What happens instead is complete stagnancy in the narrative. Frankly, one just doesn’t get moved in the manner Kishore Kumar would have expected from his audience. Even look of the film borders on the artificial rather than the real or the sublime as the original. All in all, Gopala Gopala could have been a mordacious grandiosity against the malefactors of religion but it all manages to do is mucky the debate on the existence of god.Pawan Kalyan,Venkatesh,Shriya Saran,Kishore Kumar Pardasany,D.Suresh Babu,Anoop Rubens.Commercial version of OMG