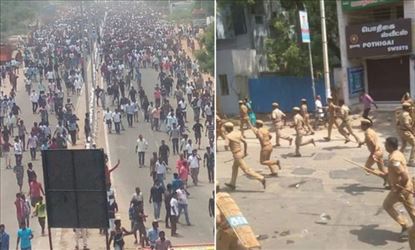 Tuticorin sources stated that a managed around 50 year old was reportedly killed in the violence that erupted near the Tuticorin district collectorate on Tuesday when anti-Sterlite protesters defied a ban order under Section 144 of the CrPC and continued their protest march. Meanwhile the protesters are demanding closure of the Sterlite Copper Smelter located near the town. Accordingly the person killed in the violence has been identified as Tamilarasan who was associated with an organization called Puratchikara Ilaignar Munnani.

For the past 100 days the residents of Tuticorin town have been demanding closure of the Sterlite plant and had announced they would take out a march to the Tuticorin District Collectorate on Tuesday, and meet the collector N Venkatesh. Furthermore the protesting public gathered for a black flag protest near the Church of the Lady of Snow in Tuticorin, while another group started to march from Madathur village.

Media report stated that police first resorted to lathi charge and then fired teargas shells along the route to the collectorate and inside the premises, the destination of the protest march. Further the vehicles on the route of the march were set on fire during the protest. Employees of the collector’s office were evacuated as the protests intensified. Moreover as the situation went out of control, more than 2,000 police personnel from the southern districts of Madurai, Ramanathapuram, Theni, Dindigul were deployed to Tuticorin.