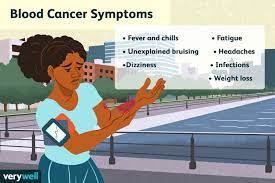 The sign of blood cancer starts suddenly and appears first thing in the morning. Blood cancer is called leukemia and occurs when the dna of white blood cells is damaged. cancer cells start growing in the bone marrow, due to which healthy blood cells also start getting damaged. These cells stay in the bone marrow and prevent healthy blood cells from growing and functioning normally and this leads to the presence of more cancer cells in the blood than healthy cells.

Blood cancer can occur at any age. There are many types of cancer and the symptoms of each cancer are also different. According to the report of the university of california San Francisco health (UCSF), the earliest sign of blood cancer is found with waking up in the morning. It has been told in the report that if you try to walk after waking up in the morning and you feel dizzy, weak or very tired, then it can be a sign of leukemia. Fatigue is very common in people suffering from this cancer and it is the most disturbing symptom. Recognize these symptoms of leukemia too

Unusual and frequent bruising or bleeding, such as bleeding gums or nose bleeds

Leukemia also has a genetic

Genetic disorders such as Down syndrome

Cigarette smoke contains benzene and has been considered a major cause of blood cancer.