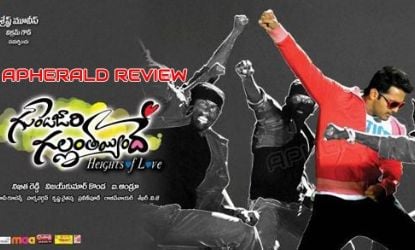 What Is Good: Nitin - Nithya performances, Interesting Screenplay, Perfect Climax, Smart Direction, Soothing Music, Clean Family Entertainment.
What Is Bad: Overall good cinema, could have been better if the story plot wasn't revealed early.
Boring Scenes: Nothing much but, bit of slow narration in second half.
Watch It Or Not ?: Sheer entertainer, Best movie your money can buy. Do not miss it.

Karthik [ Nitin ] is a software employee & love guru who likes to lead life on his terms and waiting for a perfect lady love. Karthik happened to meet Shriya [ Isha Tawalar ] in one of his friends marriage, Fall in love with her at first sight and also becomes successful in getting close to Shriya. When everything looks running smooth untill Nithya characters enters into Karthik's life. As expected love story turns out to be a triangular one between Nitin-Nithya-Isha. How did Nithya pops into Nitin love story?What was the end of this triangular love story? has to be seen on the silver screen.

With natural performance and super kewl attitude... Nithin gave an entertaining performance. Starting from body language, comedy timing, and grace in dancing and even in romantic scenes, Maturity levels can be sensed in Nitin screen presence. At times Nithin makes us feel that he is imitating Power Star. Nithya Menon yet again proved her natural acting abilities on silver screen. Justifies the "Replacement to Soundarya" tag given by Tollywood biggies. Nithaya's role enabled her to show case different shades side-by-side and she amazingly mesmerizes audience.  Oh Yes, In this movie too.. she did convey many emotions through her expressive eyes. Her weight loss is visible in songs matching her age folks. Isha Talwar role is trivial yet important one for the movie, She is just Ok-Ok. Ali role was decent and he manged to bring few laughs in the hall. Overall film has only required characters and other actors just pass by in minutes.

Vijay Kumar Konda has made a smart directional debut with GJG, his skills of framing scenes intelligently is big helping hand to the movie. You will never feel like the movie is directed by a newcomer and freshness can be seen in every frame with smart narration. Screenplay and dialogues by 'Amrutam' serial fame Harsha Vardhan stands as USP for GJG. Anoop Rubens music is soothing to listen and Back Groung Scores [ BGS ] also jelled well with scenes. Cinematography by I.Andrew is good and especially songs at foreign location were filmed beautifully. Editing was fine and production values are rich and look equal to star hero movie.

Tollywood, Kollywood, Bollywood, be it any wood... Love stories are never dying success formula in Indian Film Industry. When added clean entertainment and presented these love stories without volgurity / over skin show... Even family audiences would receive them with open hands. Director Vijay Kumar precisely implemented this in his debut  film Gunde Jaari Gallantayyinde [ GJG ].   Nitin Reddy has his own share of failures for years, almost 10 out of his 14 films were dud at box office. He seemed to have learnt about his strengths and exercised them within Ishq added Nithya's natural performance made Ishq to be best film. Nitin - Nithya with the help of Ishq gang not only repeated the magic but actually crossed it and made GJG to be more entertaining then Ishq. Freshness in story, Undercurrent entertainment, Racy screenplay added with twists... keeps you over the seat edge guessing which character is in love with whom. Pawan kalyan’s original footage from Tholi Prema, Bhumika's naval scene from Kushi are used smartly in the screenplay, this en-thrill audience. Even the gay comedy episode is hilarious with flashes in both first & second half of movie. First half is filled with entertainment, beautifully canned songs. Well presented interval bang  justifies title of the movie. Tempo of the film goes down during second half, but the fun ride keeps you involved with the film. Other than adding free publicity Jwala Gutta item song is nothing special, it is like any other item song. Climax threw light on difference between attraction & love, It would connect your heart with the mind.


Cons : Bottom - Line : Perfect family entertainer for this summer, do not miss it.