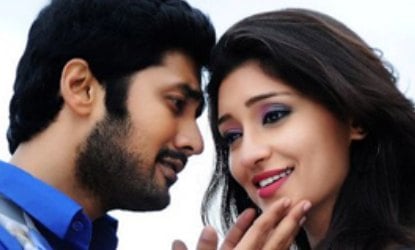 Swapna (Tanvi Vyas) born and brought up in a joint family. She always wanted freedom and never believed in close attachments. Swapna convinces her Father and leaves to Sweden for higher studies. Where she meets with Krissh (Rahul Ravindran) and their friendship turns into love in a short time.

Krrish is a one stop solution for any needs and his service comes with a price-tag of 5 euros. Krrish comes to India to meet Swapna’s family. But this go haywire and he gets to know about his family troubles.

How Krrish realises the nitty-gritty of life? Will Swapna and Krrish get together? What are the problems Krrish’s family facing? How they understand each other and get together in the end form the rest of the story line.

Compared to his earlier films, Rahul Ravindran slightly improved in his performance. Rahul’s comedy and sentimental sequences are nicely done. But Rahul Ravindran is minus for this film. He over acts in many scenes and he couldn’t carry his character with sang-froid.

Heroine character is very important for this film. Tanvi Vyas is very bad choice for the role of Swapna. Tanvi Vyas failed to justify her character to the tee. She couldn’t get into emotional mold. Chemistry between the lead pair is very stilted. L B Sriram character is casual. Sanjjanna fails to attract audience due to poorly etched character.

Storyline of the film is threadbare. Screenplay of the film is adequate in the first half and turns sloppy in the second half. Sunil Kumar Reddy’s style of direction is old fashioned. Dialogues are very routine and characterizations are not fully developed.

Cinematography by Sabbu James is fine. He shot Swedish shots near to perfection. MM Srilekha’s music is average, Kallalo Nuvve is the best track on screen. The background score is not upto the mark.

Editing could been crispier, especially he could have easily edited half of the second half & even could have removed Ali – Venu Madhav’s comedy track in the film. Production values by Suresh Productions are neat.

Nenem Chinna Pillana is clearly a hackneyed plot from an inefficient team. Sunil Kumar Reddy, the director of the film who heads this team has made some award winning films earlier, but Nenem Chinna Pillana takes the cake as his worst. He is the real culprit.

To see this film continuously for nearly 138 minutes is like inviting trouble for yourself, a torturous exercise really. People who turn up expecting entertainment from NCP as a Suresh Productions product will be disappointed. On the whole, Nenem Chinna Pillana is a film of poor taste, which can be avoided in theatres.