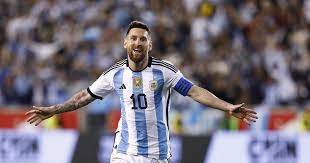 No matter how big a player is, but after a while he has to hang his shoes on the peg. The time has come for Lionel Messi, the legend of argentina and one of the all-time superstars of football has revealed this in an interview. It has also been said that he will not be seen playing in this tournament again after the FIFA World Cup-2022, which is going to be held in qatar this year. Messi said in a conversation with the famous journalist Sebastián Vignolo, this is my last World Cup. It is certain. It has been decided.

One day will count till the World Cup

Messi said, I will count one day till the World Cup. This is true. There is a slight tension. Well I am here and whatever is going to happen, this is my last (World Cup). On the one hand, I can't wait for it to come out, but I'm also looking forward to making it great.

Messi said, we are playing very well, all the matches are very difficult. This is what makes the world cup very special, because it is not always the favorites who finish with the win or perform as you expected.

This season has been red hot for Messi

This season of Messi has been red hot form for both the country and the club. argentina has won 35 matches in a row. In the last season, Messi won argentina the Copa America Cup after 28 years. Under his leadership, the team defeated the legendary brazil in the final. Looking at this and Argentina's form, he is being considered a contender for the trophy in the qatar World Cup-2022.