Shriya Saran shifts to THIS city

Shriya Saran shifts to THIS city

Shriya Saran, one of the prominent actress in tamil, telugu and hindi has shifted her base to Mumbai.

Shriya Saran, one of the eminent and long standing actress is often known for her elegant charm and the skin show. She debuted in ishtam in telugu in 2001. Ever since she has been handling her projects pretty well and has acted over 50 films combined in all the South indian industry and as well as Hindi. She was last seen in an important role Balakrishna’s “NTR: Kathanayakadu” in 2019. She got married to Andrei Koshcheev in 2018. Up until a few weeks back, she was seen having great time with her husband in foreign countries. 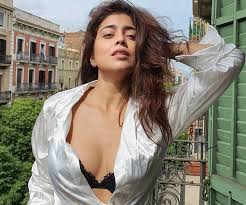 The latest update about shriya saran is that the actress is back in town and wants to resume her career. As a gesture to the same, she has moved her base to mumbai and is actively listening to scripts. Interesting thing about Shriya is she has played a pivotal role in SS Rajamouli’s magnum opus ‘Rajamouli’. Other than that she has 3 films waiting for release. One of them is telugu anthology film ‘Gamanam’. The other two are ‘Naragasooran’ in tamil and ‘Tadka’ in hindi, both of which are delayed to different resumes.