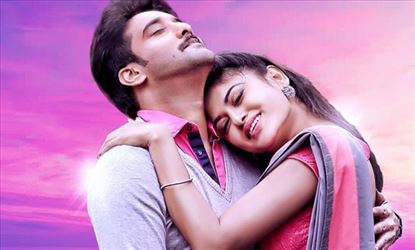 Tarun, Production Values, CinematographyTarun, Production Values, CinematographyScreenplay, Dialogues, Story, Music, Songs Placement, Editing, Pathetic Performances
Talented hero Tarun, who has been in one of the weakest phases of his career, with disastrous flicks of late, has made a comeback to silver screens, with the love story aimed at youth and on occasion of Valentine's day, Idi Naa Love Story, directed by Ramesh Gopi. Has the hero made a comeback? Here's team AP Herald's exclusive Idi Naa Love story review.
An ad filmmaker Abhi (Tarun) starts liking Abhinaya (Oviya), and just when she too starts liking him and both fall in love, he gets to know of a troublesome medical condition of Abhinaya. Whether he was able to join Abhinaya despite her medical condition is what Idi Naa Love story is all about.

Tarun, being an experienced hero, handles his role perfectly, as the role is a cakewalk for him, and he delivers a mature performance displaying emotions in a subtle way. Oviya totally is miscast, as she fails in all departments right from lip sync to expressions, and gives an awkward performance that's a pale shadow of her Performances in Tamil films. The rest of the cast doesn't get much to do in this shoddy flick.

Srinath Vijay's songs are awful as none of the songs are hum-worthy, besides Idi Naa Love story is further worsened by a terrible BGM. Christopher Joseph's Cinematography captures the songs well, while editing is a huge letdown. Director Ramesh Gopi has actually got to direct a successful Kannada flick's remake (Simple Aag Ondh Love story), but has letdown the huge opportunity to direct a beautiful love story, by presenting a bad screenplay. He has failed to extract fine Performance from his lead actress Oviya whose character is the lifeline of the whole script, while also faltering in placing necessary Interesting elements in the screenplay.

With poor dialogues, pathetic performances, lack of comedy or commercial elements to appease mass audience and badly written dialogues plus unwarranted song placements which damages the already pathetic screenplay, the movie, which was expected to rescue Tarun , ends as yet another disastrous outing that's a huge mistake by Tarun as well by the makers, who have disgraced that special occasion of valentine's day.

Tarun,Oviya,Ramesh Gopi,SV Prakash,Srinath VijayNot a movie for the valentine's day, This love story neither has love nor life in it, ending up sinking Tarun's career.