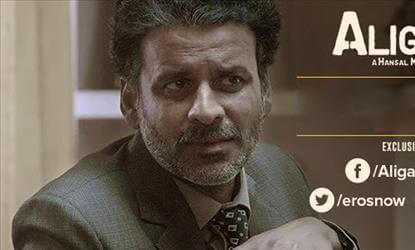 'Aligarh' seems to be one of the most controversial movie made in Bollywood. The movie was based on the real life incident of Dr.Srinivas Ramchandra Siras. Hansal Mehta who gave us movies like 'Citylights', 'Shahid' has brought one more gritty and hard hitting movie for us. Siras who is a talented professor seems to be a homosexual and he was suspended as he was in a physical relation with a rickshaw puller. He ever got back his post as he was suspended. Finally after long battle, the court gave the case in his favour and he was found dead. The verdict came in his favour, but he lost his life. The movie clearly conveys a message about privacy and gender equality. Rajkkumar Rao who is the journalist has brought the story to lime light.

Coming to performances, Manoj Bajpai has lived upto the role of Professor Shrinivas Ramchandra Siras. He has done a top notch performance and has delivered a brilliant performance. Take a bow sir. The movie was earlier screened at  17th JioMAMI Mumbai Film Festival on October 30, 2015. The movie got a standing ovation and most of them said this movie is Manoj Bajpai's masterpiece. No wonder they said it. This movie deserves to be a milestone in history of Indian cinema and credit goes to Manoj Bajpai. The movie proves that love has no sexual connotation.. Anyone can fall in love. It may be love with a person or a thing. The movie is not about homo sexuality. It is a movie about human rights, equality, right to privacy and the idea of democracy. Manoj also deserves claps for his body language and Marathi accent. He also shows the poetic mind of a professor. He has provided details even to small things in the movie. This is a spell bound performance and this movie is a career changer for him. Rajkummar Rao as journalist has also done a neat job. Ashish Vidyarthi as Siras’s lawyer supports the duo.

Technical wise the movie is solid. Satya Rai Nagpaul's cinematography deserves special mention. The colour tone of the movie shows the impact. The movie is hard hitting and the dryness is portrayed before our eyes. When the protagonist sips the whiskey the background goes dark. Karan Kulkarni's music is soulful and it clearly shows the pain of the protagonist. In fact, that is the second hero of the movie. Apurva Asrani's cuts were perfect.  There are no zig-zag cuts here and there. The movie overall is a neatly made  flick.

Most of us would have speak about Gender equality, Morality, Freedom in social media and various platforms. But very few follow it in our day to day life. This movie should be applauded for its realistic manner.