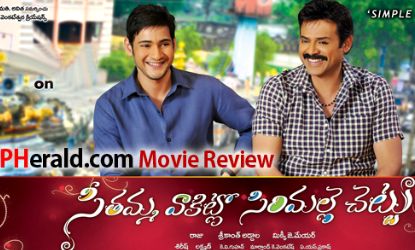 Sita[Anjali] lost her parents at birth and grew at uncle Relangi’s [Prakash Raj] place. Relangi believes in humanity, leads simple middle class life with wife [Jayasudha], daughter [Abhinaya], sons Peddodu [Venky] and Chinnodu [Mahesh]. Peddodu is straight-forward stubborn and Chinnodu is smart & naughty by nature. They have infinite love, affection for each other and keeps struggling hard to settle in their careers. Paternal uncle of Sita [Rao Ramesh] treats her and Relangi family as cursed and keep offending them, which makes Peddodu to develop hater on him & his family. The ongoing career problems of both the hero’s like, love episode of Chinnodu with Rao Ramesh's daughter [Samantha] upsets Peddodu and accident to Relangi, how all these things complications & affected relation between Peddodu, Chinnodu has to be seen on the silver screen.

Venkatesh's performance as stubborn - angry man, who speaks his mind and at the same time maintaining high bonding his brother is good. His level of maturity in acting can be sensed in few heart touching emotional scenes. You will observe Venky maintaining a low profile as per character and give driver seat to Mahesh. Prince Mahesh Babu has kicked butts of every comedian with his trademark special comedy style. He attracts audience as witty lover boy, and managed well to justify the character of ‘Chinnaodu’. Anjali spell bounds audience with her natural acting. She looked traditional in sarees with beautiful dialogue delivery and didn't let down makers decision as lead opposite Venkatesh. Samantha's characterization had not much scope for performance, she made her presence  felt with couple of songs and scenes with Mahesh babu. Rao Ramesh left his mark with good dialogue delivery with apt diction and expressions. Prakash raj and Jayasudha did their regular jobs casually. Nothing much about other characters

Srikanth Addala scores good points for handling two top stars characters quite well, while his direction and storytelling is decent. Guhan’s cinematography looked colorless visually to maximum portion but scenes between Venki & Mahesh are filmed neat. The songs composed by Mickey J Meyer are not soulful to ears, expect couple of songs. Background score by Mani Sharma is an asset. Dialogues are entertaining and editing could be better.

Sankranthi is not only special event for Telugu's across the world, but a very crucial time for Tollywood as all the big flicks foray into grabbing collections and stealing fans hearts. In the last few months, SVSC gained such a momentum that every telugu movie fan is looking forward for this multi-starrer. Bringing and handling two big star heroes together for a film about human relations is something like 'Mission Impossible'. Srikanth Addala, who is just one film old pulling this hard task should be appreciated for his courage. Its a positive sign to see two big star hero's after 25 years doing a multi-starer film. This film has opened and gave life back to true multi-starer movies in Tollywood. Colorful background screen with director Srikanth's voice over about human relationship is complemented with middle class family atmosphere. This will definitely reminds about place where you were born and brought up. Introducing two star heroes in different themes within a single frame is creative, however the solo song 'YemChedam' lost its charm because of director's plan of canning it with so natural feel. Venki and Mahesh's friends gang scenes, Bharini and Ravibabu comedy scenes, Raja Ravindra police episode are not good, even disturbed the main theme of this film. Mahesh's mass dialogues with pretty girls sounded comedic, scenes between Mahesh babu, Grandmother and mother are cherish-able. Few emotional scenes between brothers were natural and heart touching. Even after casting 'can't ask for more' combination of Venky&Mahesh... entire movie go flat and never picked up the pace. You would wonder about why should there be two star heroes for such story plot and poor execution. Apart of 3-4 heart touching scenes between Mahesh-Venky and Venky-Anjali entire movie looked like kichidi of perceived comedy, Time pass friends, unconvincing family disputes and non required police scenes. Though the movie was announced to be a focused one on noble topic 'Human Relationships'... Director had to struggle even to showcase bonding of brothers.  When movie started picking pace and gaining required feeler to be a not bad film, team axed all the dreams of fans by showing an never expected END card. One would wonder about why this movie was hyped to be a 40Cr+ movie, when there are no colorful scenes and even songs visualized very cheap manner.  Prince Mahesh charishma & victory Venkatesh family fans base should save this movie from being debacle.