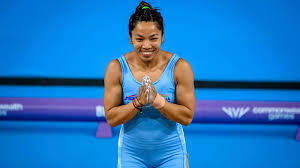 Olympic silver Medalist Mirabai Chanu on friday captured the gold medal in the 36th National Games 2022. She lifted 191 kg in the 49 kg category of women's weightlifting event. Mirabai, who won the gold medal at the Commonwealth Games in Birmingham in august 2022, lifted the title by lifting 84kg in snatch and 107kg in clean and jerk. Mirabai, who is participating in her second National Games, revealed that she has a left wrist injury so she did not appear for her third attempt in both categories.

Mirabai said, "Recently during training at NIS Patiala, I had injured my left wrist after which I decided that I will not take many risks. It's a proud moment for me and the excitement doubled when I was asked to lead the contingent at the opening ceremony. It is usually very busy to attend the opening ceremony as my events start early the next day.

The Manipur legend is focused on the World Championships where he is expected to take on some of the biggest lifters from Asia. The 28-year-old weightlifter stated that It's on the championship, where I will get a chance to compete against the same lifters.