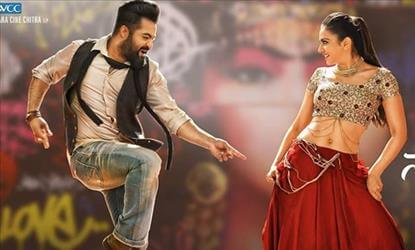 Jr NTR make over, Jagapathi Babu Prima performance, Cinematography, Few Butterfly Effect Shots.Jr NTR make over, Jagapathi Babu Prima performance, Cinematography, Few Butterfly Effect Shots.Predictable Narration, Dragged Second Half
Nannaku Prematho is all about family and betrayal and the flawed decisions made partly on their behalf. Movie is a tale revolving around Abhi (Jr NTR), the son of an India’s richest entrepreneur Subrahmanyam (Rajendra Prasad). He is admitted in hospital, due to Korsakoff syndrome. Knowing few facts, Abhiram goes after Krishnamurthy (Jagapathi Babu) as he interferes in and rigs the life of Subrahmanyam. Eventually, Abhi decides to start over KMC Company and takes upon a challenge to stop the ruthless businessman Krishnamurthy. That’s when he comes across Divyanka (Rakul Preet Singh) and tries to impress her by falsifying love. This turns out to be true love, after few pre-planned “chaos” meetings. What’s your price to fulfill the dream of your ever loving father? The question that haunts Abhiram till the end. The rest of the story is how Krishnamurthy go bankrupt and turn into a felon in front of International Media.

For more than 15 years, N T Rama Rao Jr has been a star, not afraid to share the spotlight with his co-stars, arguably creating some of them along the way. Can you imagine “Aadi” without his strong screen presence? He was also good as a soft law student in “Student No. 1”, also stole the hearts of his fans sporting a larger than life character in “Yamadonga” and “Simhadri”. Once Again, he takes the spotlight, giving powerful and stylish performance as the son of India’s Richest Entrepreneur in “Nannaku Prematho”.

The way the actor thumps and clamps with the Srinivas Avasarala and Rajeev Kanakala is simply a brilliant at the pre climax episode. Rakul Preet Singhis charming in her role. She shares an enchanting chemistry with Jr. NTR. I wish that they had got Rakul’s voice dubbed by someone else though. Jagapathi Babu is a screen charmer. His salt and pepper look is apt for this role and his dialogue delivery is superb. Rajendra Prasad has nothing much to do in the titular role, and even his facial expressions are those that we have seen in innumerable films of his before. Madhoo, Naveen, Liza van der Smissen and Thagubothu Ramesh chipped in nicely in their limited characters. Baby Vernika was a delight to watch in a small cameo.

The story of Nannaku Prematho reminds you of many number of films that you had seen. Where protagonist father gets betrayed and his son comes to take his revenge on the antagonist.  Ahem, Now that isn’t the kind of tale you would expect from the film maker Sukumar, and even then you hope that he would manage to keep you engaged by the film proceedings.

But the script constantly reminds you that we have boarded similar vehicles several times before. The theme of son taking the revenge isn’t something new, and if you pen to tell a story based on often repeated theme, Sukumar should have taken some other point that viewer could have easily connected to, than telling the same old theme of “Revenge is best serve cold” with added chaos theory. There is nothing new in here, other than the way Jr. NTR tells about three kind of people – the way Jagapathi Babu & NTR talk at the Interval – Premeditation “Butterfly Effect” shots in few scenes – The final conversation of NTR – Rajeev & Srinivas with Jagapathi Babu.

For the kind of story that it tells, Nannaku Prematho is awfully long, and has a running time of two hours and forty eight minutes. Almost three hours of storytelling unfortunately doesn't merit this story. If Butterfly effect “Changing one Thing. Change Everything” was the formula behind NKP, director should have worked a bit on the following aspects. He fails to tell us regarding the work of rich entrepreneur Ramesh Chandra Prasad – Never tries to explain how a highly intellectual and richest entrepreneur was marooned by a ruthless businessman – Never tries to showcase how did Jagapathi Babu turned into a multi billionaire from a drug smuggler - What happens to Jagapathi Babu post his escape from UK – Even though a high level International Natural Gas plant was established at a deserted place, no one tries to check whats happening around the plant till the Natural Gas gets finished by another plant – What did team KMC do with amount they slewed from Krishnamurthy – Even in the end NTR fails to make Jagapathi Babu admit his mistakes etc.

Even after it all comes down to a monotone ending, the film is stretched a bit further, wanting to disclose a climactic twist. This turn around however, is another major disappointment, especially since any discerning viewer might be able to identify the surprise by then. Trimmed of probably a good thirty minutes, the film could have appeared a bit more compact.

Vijay C Chakravarthy’s camera work is of superlative nature and the end result is a visual feast, especially at chase and fight sequences. Music by Devi Sri Prasad is mediocre. The picturization of songs serve as speed breakers in the narrative. Background Score by DSP fails to score on the emotional note, hence it fails to connect few times. The Costume Designer did a fine job. Production values of Sri Venkateswara Cine Chitra are all right.

Change one thing. Change everything – The Butterfly Effect

Nannaku Prematho has an old hat theme that sadly falls short of the objectives of the film maker. Part Intellectual Revenge and Part Family Drama, the film is obviously much ambitious and yet struggles to maintain its steam as its struggles through unhurried family moments. However, there is little that comes to my mind except for prima performances by both Jr NTR and Jagapathi Babu. All in All, Nannaku Prematho offer a few promising moments, but remains quickly forgettable.