Varun dhawan and Kriti Sanon's film 'Bhediya' has been released in theatres, which is getting a good response from the audience. people are praising 'Bhediya' fiercely on social media. At the same time, now filmmaker hansal mehta has also seen this film, after which he made a tweet and said that this film should be made into a franchise. However, one user did not like his statement much. For this reason, hansal mehta was trolled. But filmmakers have also been seen giving a befitting reply.

Actually, after enjoying the film on the weekend, hansal mehta made a tweet, in which he wrote, 'Bhediya is an achievement, an experience. I walked in as a fan of amar kaushik and walked out of the cinema hall an even bigger fan. Top class VFX, has a good story, is technically top class, and has very good acting. This film deserves all the encouragement and success to become a franchise. It is clear from this tweet that hansal mehta liked this film very much.

However, a user did not like this tweet of hansal mehta at all and he called the franchise a failure at the box office. The user wrote, 'Kar lo support, box office failure hai yeh.' Filmmakers also give a good reply to this tweet to the user. He writes, 'Sorry feeling for your father's money.' At the same time, a user-supported hansal mehta wrote, 'Suppose sir, if this film fails, we will fail as an audience and then we are the ones who say,' Now there are no good films in Bollywood. Made it. 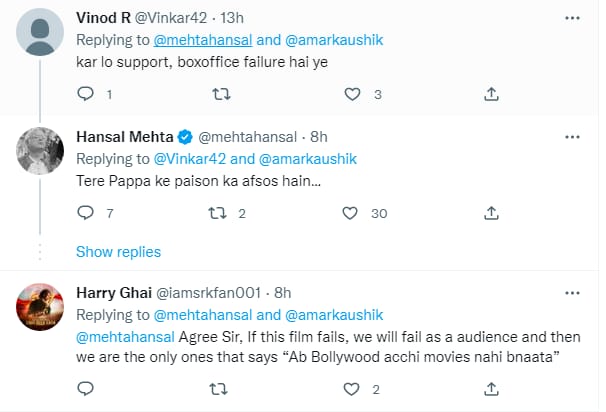 Let us tell you that 'Bhediya' is a comedy film along with horror, in which abhishek banerjee has also been seen along with varun dhawan and Kriti Sanon. This film is directed by amar Kaushik. Released in theaters on december 25, the film has collected around 17.05 crores in just two days. The film is expected to do well at the box office