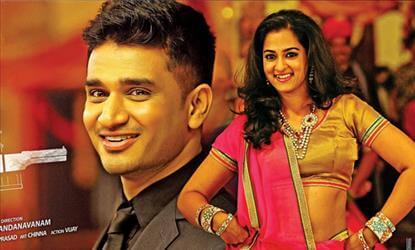 Sankarabharam story of an NRI Goutham (Nikhil) who lives with his family in, America and his family is verge of bankruptcy. At this time his mother (Sitara) tells about Sankarabharanam palace and to prevent his family from being bankrupt, Goutham leaves to India. Soon after arrival he is been kidnapped and then after series of events, an ambit of Kidnappers and the NRI gets mixed up in a stew that keeps passing hands from Sanjay Mishra and Anjali. Here starts a crazy ride of kidnapping leaving everyone involved in it befuddled.

It’s Nikhil Siddhartha’s show all the way who carries the film on his potent shoulders. But its one of the worst scripts Nikhil has signed in recent times. Nandini Raj delivers what’s expected of her. Moments of love and charming together moments between Nikhil and Nanditha are quite absent in the film. Suman and Sitara are fine in their respective roles. Anjali is adequate in her role as female goon Daaku Rani Munni. A battalion of comedians like Sapthagiri, Prudhvi, Sathyam Rajesh, Harsha, Sanjay Mishra, Shakalaka Shankar try hard to evoke laughter, even the jokes falls flat most of the time. The introduction scenes of Sapthagiri and Prudvi are the funniest sequences of the whole movie. The situation look regular and predictable, which makes you squirm in your seat. From the supporting list of actors Rao Ramesh and Sampath Kumar deserve a special mention.

Sankarabharanam had a small tale to tell. While it’s an official remake of 2010 Bollywood Hit Phas Gaye Obama, from then there have been several films of late that have been made in Telugu cinema with this kind of situations. What completely lacks in this remake are emotions, fun and novelty in terms of the story and characterization. Even if we delve deeper seeking logic, then film could be even disappointing as the script is loaded with plot holes that range from daft to the bootless. Poor champ Debutant Uday has been completely taken off from his responsibilities as Story-Screenplay-Dialogues and Direction Supervision is handled by commercial writer Kona Venkat and at every juncture he failed to reach the standards of the original. The weaker developments in the screenplay, puts the film on the boring side. The comedy and punch lines are forced into the scenes, no matter how hard characters try to make us laugh they completely fail. The writer does succeed to pull out a few giggles once in a while with some of his comic lines though.

Coming to other technicalities, Music composed by Praveen is not as exciting as the BGM. Songs and comedy are forced into the narration, which actually spoils the tempo of the film. Cinematography by Sai Sriram is good. The editing of the film is choppy and the transition between the scenes are quite abrupt sometimes. Trimming few songs and few forced comedy sequences could have sustained the pace. Art Work by Chinna deserves a special mention for the special sets. The production values of “MVV” cinema are alright.

In an Industry where silly comedy sells better than anything else, Kona Venkat has become the first preference. Sankarabharanam is another comedy entertainer from the commercial writer of Telugu Cinema with debutant director Uday Nandanavanam. It’s an official remake of Phas Gaye Obama (2010). What worked for Phas Gaye Obama are the original content, short runtime, slapstick comedy and honest performances. But this remake completely failed to match the standards of the original. It fails to evoke laughter with formulaic comedy and situations seen in many films in the past. By trying to create funny situational comedy the debutant director completely lost grip on the story that goes haywire from the word go. To summarize, Sankarabharam includes a pinch of comedy, a splash of craziness and a big gang to promising actors. If you thing they all have made Sankarabharanam a worth watch, then you are wrong.