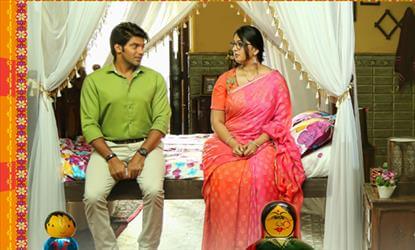 The plot is simple. The movie is about a fat girl who keeps on munching. She puts her parents in distress as she is over weight and they find hard to find her a suitable bridegroom. The problem is being obese. Sweety (Anushka) gets friendship of Abhishek aka Abhi (Arya) and starts falling for him. After she gets heart-broken that Abhi is interested in another girl Simran (Sonal Chauhan). To get back Abhi she joins a weight loss program run by 'Size Zero' sathyan (Prakaash Raj). Once she joined she learns that these weight loss methods are harmful to life and she makes a campaign against his business along with support from Abhi and she makes a message that fitness can only be achieved by exercise and diet.

This movie talks about themes such as the superficial view of the world, how beauty becomes an obsession, how the most beautiful heart can hide inside a bigger girl, how people will give everything to a girl with beautiful face. Anushka is the show stealer in this venture and the entire story revolves around her. She did complete justice to the role. Her performance is the most notable one. Prakash Raj makes an impact as a gym owner and Oorvasi strikes bull's eye as Anushka's mother. She has done a neat performance. Arya doesn't have much screen space. Sonal Chauhan is just used for skin show. Each and every actor in the film has a piece of advice on keeping up your fitness and nothing else.

Coming to technical side, the first half is a little bit enjoyable. But the second half gets too draggy and it irritates after certain point. The climax is also too lengthy and it annoys us even more. The song placements at unnecessary times test our patience. Nirav Shah's cinematography is top notch and deserves a mention. MM Keeravani's background score is average and nothing works in favour. The lip synch is another thing which went horrible. Most of the movie was shot in Telugu and that is another big minus.