199 people, including many children, have died in indonesia due to cough medicine. Due to this, people have filed a case against the government to keep the protests aside. They have also demanded compensation. indonesia is a Southeast Asian country. Many people have died here due to kidney failure due to cough medicine since last August. So far 199 people have died this way. Many of them are children. In this case, people have filed a case against the country's Ministry of health, Food, and Drug Administration. They claim that this damage is due to the medicines supplied by 7 pharmaceutical companies. 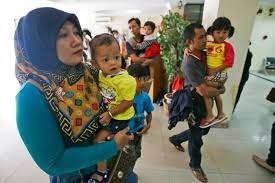 Avan Pooryadi, the advocate for the victims, said that initially deaths were reported here and there. The pharmaceutical companies concerned should be restrained from distributing more similar drugs. But the government did not do that. It is said that the anti-freeze chemical used in the industry has been used in drugs. He said that 2 billion rupees 1,27,049 USD should be paid to the families of the deceased and 1 billion rupiahs i.e. 63,524 USD to those who suffered from kidney failure.

This incident shocked the world. In this regard, the World health Organization tweeted, "Today, the World health Organization has issued a medical alert regarding four contaminated drugs identified in The Gambia, which may have been linked to the death of 66 children with severe kidney problems. The loss of these young lives has caused pain beyond heartbreak for their families.Those four medicines i.e. cough and cold medicines are manufactured in india by Maiden Pharmaceuticals Limited.

199 deaths due to cough medicine