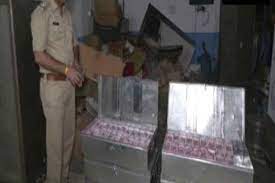 With the assembly elections approaching in gujarat, gangs of fake notes have also become active. The gujarat police on thursday caught a consignment of counterfeit notes of Rs 25 crore being carried hidden in an ambulance, the police officers were also surprised to see the notes. On these notes, instead of the Reserve bank of india, the Reverse bank of india was written in English. The police confiscated all the notes. Now it is being investigated where these notes were printed and to whom were they being delivered.

Fake notes were kept in the box

According to the report, Surat's SP Rural hitesh Joysar told that the Kamrej police had received input that some people were going on the Ahmedabad-Mumbai highway with a consignment of fake notes. On the basis of this input, the vehicles were checked. During this, when the response of the driver of an ambulance seemed suspicious, the police searched the vehicle and found 6 cardboard boxes kept inside it. Packets of fake notes were kept in these boxes.

Notes were kept by making 1290 packets

1290 packets of 2000 rupees notes were found, which was a total of 25.80 crores. At first sight, the driver was being questioned as someone's black money. Meanwhile, a policeman, looking at the note very carefully, caught the difference between the Reserve bank and the Reverse Bank.

Assembly elections to be held in December

Assembly elections in gujarat (Gujarat Legislative assembly election 2022) are to be held in december this year. In these elections, while the ruling party BJP is eyeing to maintain the government, the main opposition congress and the Aam Aadmi party, which is trying to become the third player, are trying to improve their performance. For this reason, it is believed that this consignment of fake notes is also related to elections.