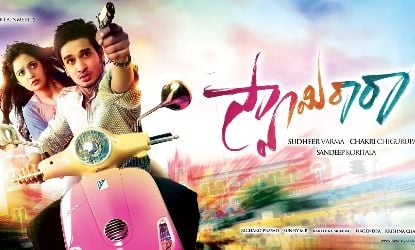 
What Is Good: Stylish Screenplay, Nikhil's performance, Effective BG Score, Climax.
What Is Bad: Simple story, No killer instant scenes, Lack of entertainment, Slow narration.
Boring Scenes: Second half till pre-climax
Watch It Or Not ?: One time watcher.

Surya[Nikhil] is a pick pocketer doing small time thefts with his gang of Pooja and Sathya. Swathi[Swathi] is a journalist and she gives tuition to near by primary students. Accidentally Nikhil & Swathi becomes friends and it develops in to love within no time. When everything is running smooth an antique Ganesh Idol which was stolen from the secret chambers of Anantha Padmanabha swamy temple enters in to their life. How did this idol drops in to their place, what did they did with it, has to be seen on the silver screen.

Nikhil did a terrific job as an actor in this flick. Kudos to change in his dialogue delivery with settled performance acts and onscreen you can see more of character than Nikhil. By far best performance by Nikhil in his film career. Swathi looked cute and innocent throughout the movie. But spl natural spark which she carried in her previous films is missing totally here. Ravi Babu and Jeeva were neat in their roles of comic villains.Love failure fame Pooja Ramachandran and upcoming comedian Sathya did complete justice to their roles. Good to see Jogi brothers after a long time and made their presences felt.

Sudhir Varma did a fab job in terms of screenplay, dialogues but a one liner story has suppressed all his efforts. One thing for sure his potential can be sensed and he will stick in Tollwood for longer time frame. Background score by Sunny M.R. is excellent, this has played major role in elevating key scenes to get audiences connect with the movie. His tracks sounded fresh with life in it. Cinematography by Richard Prasad was nice and some of the slow motion scenes looked kwel. SR Shekar editing looked fine and production values were alright with respect to theme and run time of the film.

Swamy Ra Ra is a crime thriller film which runs with a stylish screenplay as its USP. A one liner story stands as biggest drop back but with fresh & technical team support it turns out as one time watcher. Let’s discuss a little more what Swamy Ra Ra is offering to audiences. Film opens with a perfect opening scene of Jogi brothers shooting a person in day light, which is filmed in ultra-slow motion raising gud expectations. Introduction of Nikil & Swathi characters looked very fresh and appealing. One unique feature in the film is all the songs runs in back drop without any necessity of lip sync from actors. First half is wrapped up with love track between lead pairs and Ganesh idol being shared from one hand to other and by interval you can see glimpse of Delhi Belly shades being inspired & used in the movie. Second half is where the movie plot gets revealed totally and this slows the phase of the movie. Nothing interesting runs till movie reaches pre-climax part. From here you will see couple of interesting twists which brings movie back in track and this continuous till climax. Showing every scene with a logic behind it, detailing most of the scenes and making the content of the film as hero deserves appreciations to team of Swamy Ra Ra.