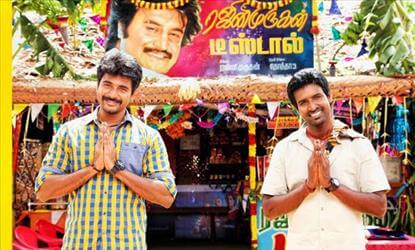 Finally after long hiatus and lots of barricades, 'Rajini Murugan' has been released. So what is this movie all about ? There is nothing new. Jobless Jack becomes a rich guy all of a sudden is the one liner. In this, the story is blended with emotions and more humour. Samuthrakani as real estate agent has done a neat job. Keerthi Suresh as KD has done a bubbly job. She is pretty and handsome. She has nothing more to do. The movie was funded by N. Subash Chandrabose and N. Lingusamy under Thirupathi Bros banner.  Production values are so low. Rajkiran as grandfather of 'Rajini Murugan' has rocked with a stellar performance.

Siva Karthikeyan is as usual energetic. He gives a rollicking performance as 'Rajini Murugan'. Gnanasambandam as his father did justice to the role. He already did justice in similar fashion in SMS movie. That time he essayed role of Anuya's father. Robo Shankar and Soori bring down the roof with their witty one liners. Samuthirakani has given a brilliant life time performance as Elarai Mookan. Keerthi Suresh as N.Karthika Devi (KD) is cute and bubbly. She has all potential to be a lead actress in Kollywood. Without glamour she can definitely reach more heights.

D.Imman who gave mesmerizing tunes in 'Varuthapadatha Vaalibar Sangam' has just produced mediocre tunes here. Balasubramaniem's cinematography has been a magic. Each frame is sketched to perfection. The village nativity is brought with some lively colours. The natural lightings and colours tones are well balanced. They give a good ambiance to us. Vivek Harshan's cuts are crisp. But some scenes are too draggy. Especially the scene where Soori and Siva drinks and makes a fuss is a tag long. 159 minutes running time feels as if we are watching a lengthy serial. Ponram's script is nothing more to be mentioned. An expected simple narration.

'Rajini Murugan' is definitely not good as 'Varuthapadatha Vaalibar Sangam'. But it has its own moments. The team has managed to deliver half of it. But still the history cannot be repeated. Siva karthikeyan's gimmicks work to an extent. Songs are so average. That is something negative. The length is also too draggy. This movie can be compared to Dhanush's 'Thangamagan'. Just like how the team failed to creat 'VIP' magic with 'Thangamagan', this team has failed to create 'VVS' magic with 'Rajini Murugan'.