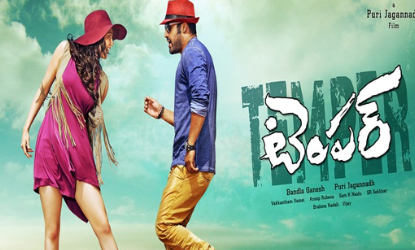 Realization, Courtroom Sequence, Jr NTR, BGM, Dialogues , Good Entertainment, SongsRealization, Courtroom Sequence, Jr NTR, BGM, Dialogues , Good Entertainment, SongsSituation less Songs Placement, Storyline, First Half, Limited characterizations, Predictable NarrationOne way or the other Police will always protect. The movie has a simple story if not the simplest of the age. There is nothing complicated in an orphan young man from Hyderabad, Daaya Shankar (Jr. NTR), who hopes to become a police officer. With the help of local people, Daaya succeeds and turns as Sub Inspector of Hyderabad. Seeing his corrupt angle, Valter Vasu (Prakash Raj) makes him transferred to Vishakapatnam. Due to some unseen circumstances, Lakshmi (Madhurima) gets involved in a rape issue. Seeing the proofs from Lakshmi, Daaya gets to realize the true responsibility of a Police officer. Why were Vasu's men trying to kill Lakshmi? Who is Lakshmi? What's her attachment with Shanvi (Kajal Aggarwal)? What will Daaya do, after realizing his goal forms the rest of the storyline.Jr NTR is nothing less than brilliant here, as he has another feather in the cop here. It is amazing how he has managed to flourish under almost every condition that has been put before him. How effective can he be? We can never know the limits of his abilities as it seems. Posani Krishna Murali is also nothing less than the powerful and later the helpless figure that he is supposed to be - there are actors who could have easily made this character more effective. Posani fails to bloom in this character. Prakash Raj and JP are also good and the former is extremely efficient at times Kajal Aggarwal is okay and suited for the role with her looks alone, otherwise she has much less to do. Pavitra Lokesh, Madhurima and Tanikella Bharini are limited to a few minutes on the screen. Ajay and Subbaraju have very less dialogues and presence.There was another film titled 'Pataas' that I had seen about a month back that talked of a corrupt police officer, who realizes his responsibility while solving a rape case. It's pretty much the same in 'Temper' except that you have an orphan instead of the son who pens a revenge on his father. There are not many situations in the film that you haven't seen in several other films (like; Rakhi, Gabbar Singh, Jagapathi, Lakshmi Narasimha etc) that have been molded on the same lines. There's nothing much to dwell on, when it comes to the storyline. The formulaic plot follows a much trod path, and the suspense build up nothing more than run of the mill. Its non-specific backdrop and lowset action sequences prove to be a mostly unmemorable affair. In the first half movies runs on gaudy, verbose and drilling, the film goes down in an ocean of ceaseless pursuits and misery-go-rounds. In the second half, its follows the style of Pataas and might be repetitive for some and for those who didn't like that movie by much can think twice about this one. There might be a few more questions unanswered like; how a Telangana SI gets transferred to Andhra Pradesh region; How come Judge believes the proofs told by a case officer against the perpetrators; Without seeing the physical or other evidences Judge finalizes the verdict on the rape case & there is no proper justification to Prakash Raj characterizations. Script by Vakkantham Vamsi needed a lot more right proportion of scenes, giving more idea about what it is all about. The script writer totally failed to elevate every character in the film other than the main lead. Even the screenplay does seem to get a little stretched in the middle, but that's solved soon with Police Station fight sequence and Courtroom scene. With Puri mark dialogues, fights, close-ups and the hero's attitude that is shown again and again, things become pretty repetitive here.

The technical aspects gel with the theme. There are six tracks in the film, which always breaks the tempo of the film and which isn't catchy either, could easily have been avoided. Luckily, Temper title track is nicely picturized and a sort of relief from the rest of songs. The background score by Mani Sharma matches up to the mood of the film. Dialogues are major asset of the film. Like; Naa ego ni pamper cheyyali Tamper kadhu, Andari mundu ee ammayini rape chesindi nene anni oopukunne dhairyam maaku undi, repu podhunni logga oori shiksha eese dhammu meeku undha. The editor however, could have gone in for faster cuts to give the kind of feel that people expect from these types of films. The action direction does leave mark with Police Station sequence, as I told earlier. The rest of the action sequences, though they involve plenty of exaggerated movements has been choreographed in a middling fashion. Cinematography of the film by Shyam K Naidu is neat. Production Values of Parmeshwara Arts are grand.The movie leaves one with an unusual feeling, like it seems that the movie is okey-doke, but there is so much of rawness about it, and it did contribute with some boring moments to add to the already monotonous life. The movie should have been clearer in what it tries to accomplish. Its power is the Police and the twist about the murder mystery in the end, which should have been further explored - here, the investigative side is too weak. On the whole, Temper is not entirely bad and it's modeled on the kind of films, which are popular a few years ago. But then it can be watchable for climax and Jr. NTR new dimension. The first half, Songs and Puri's philosophy disappoints bigtime. This could have been better than Pataas, but still it isn't.

rajamouli ss ‏@ssrajamouli : Apologies.. #Temper script was by Vakkanthan Vamsi garu. Tarak always had a high opinion on him and he proved his mettle. Very good work…

Ram Gopal Varma ‏@RGVzoomin : Off to Bramharamba theatre to watch the 5 o clock show of Tarak's and Jagan's Temper..first time I ever did in more than 30 years

rajamouli ss ‏@ssrajamouli : Congratulations to the whole team of #Temper. Time for celebrations!!!

rajamouli ss ‏@ssrajamouli : Along with his trade mark characterisations and dialogues @purijagan garu also gives a strong script and a super climax. #Temper

S R Sekkhar (Shiva) ‏@SrSekkhar : Tarak on roar.... Thank you for the BLOCKBUSTER.... Dear Boxoffice, get ready to blasttttttttt.... #Temper

Harsh C ‏@HarshaAdonis : If it is Gabbar singh for Pawan, Dhookudu for Mahesh, it is #Temper for NTR. A perfect comeback film. One Man Show! Blockbuster @tarak9999

Kannan ‏@TFU_Kannan : #TemperMania in Tamil Nadu! The film has taken Terrific start in Chennai & suburbs, Day1 sold out in Trichy area too.

Tollyboxoffice.com ‏@Tolly_BOXOFFICE : With each passing show, the talk is getting even better. Unanimous response for NTR's outstanding performance in 2nd half #Temper