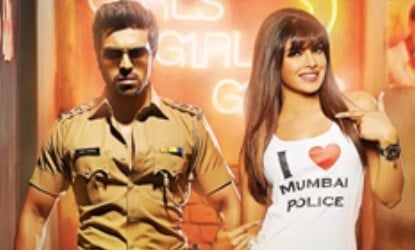 What Is Bad: Script, No Entertainment values, Music, BGM and failed to reach the tops of the original

Watch It or Not?: Thoo”fan” only for fans

Vijay Khanna (Ram Charan Teja) is aggressive and honest police officer gets constantly transferred due to nervy ways of amending the hoodlums. In his 5 years of service Vijay gets 22 transfers record. He takes the charge in Mumbai and starts investigating a murder mystery of Collector. In this process of solving the murder case he meets up with Mala (Priyanka Chopra) main witness in murder case and Sherkhan (Srihari) an illegal dealer. As Mala refuses to help Vijay in this case Vijay assures her safety and shelter Mala. Impressed with Mala, Vijay unknowingly falls in love with her. As things going in-between Teja and Vijay, Vijay joins his hands with Sherkhan for his honesty. Rest of the film falls how Vijay take care of Oil Mafia and stop Rudhra Prathap Teja (Prakash Raj) for illegal business.

After watching epic performance of Superstar Amitabh Bachchan in Zanjeer, it hard it reimagine some other doing the same job. But must say Ram Charan has brought his acting experience and given an okay job. Actor should have worked on his wooden expressions in important scenes. Most of the other characters hardly hold any potential. Mahie Gill seems to exist for no reason. Priyanka Chopra is a NRI and acts so silly that she flirts explicitly with ACP Vijay in front of his subordinates. Prakash Raj continued his conventional villain-ism with Teja’s character. Tanikella Bharini is good in his role. Srihari failed to reach the mark of veteran Pran’s character in Zanjeer. It’s a director’s fault as he allots little screen space. Some characters take the screen for so long while some others don't even get the privilege of expressing their true nature and intentions.

Apoorva Lakhia remaking Zanjeer keeping its essence was not an easy job, it was even tough job to select cast to impress an immortal performances. The story by Salim Javed appears to be very niggling. But thrilling narration could have made this story interesting is missing in this film. Apoorva has failed to engage audience, as there are many loop holes that left blank. Like, Priyanka was attacked only once even though she was the main witness for murder and she roams freely, Director failed to Justify Tanikella Bharini’s character ends it suddenly, Sherkhan never gets attacked even though he rejects Prakash Raj’s offer. A powerful characterization for main leads was missing in this film.

There could be any number of reasons for sweeping this film off, and the slow paced manner in which the story unfolds, does play a major discouragement. Songs with the manner in which they have been integrated into the tale, simply should not be there. The Telugu lyrics don’t sync well with the Hindi tunes. There is the script too that is a depressant, and it has very few heart pumping moments. Especially the meow scenes between Mahie and Prakash Raj are horrible. The film is relatively short and has a running time of just more than two hours, and a further twenty minutes could easily be trimmed out, that could have made it much crisper. Director should have taken extra care on music of this film; even background score of the film is very loud. Cinematography by Gururaj R. Jois is middling. His action action episode shots are well framed. Vijay blasting a colony of Teja’s followers with Car reminds us of Badboys chase sequence. Production values of Mahi’s Entertainment, Flying Turtle are grand. On the whole, a sequence of garbled – doltishly funny - ho-hum - unnecessary scenes make Thoofan a movie you can blithely miss, certainly a harsh remark. But then, the movie doesn't show you any mercy.