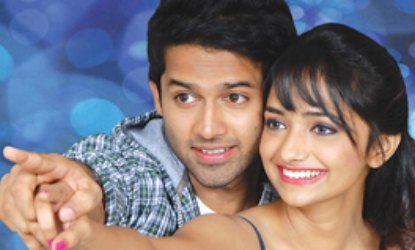 Story begins with the introduction of Ram (Ajay Manthena) a freewheeling lad, who accidentally meets Neeru (Jiyana) in his new house. Both stay with their families in the same house due to some flat issue with original owner Narayana.

Due to an incident Neeru starts testing Ram with different issues to confirm him as her boyfriend. Seeing his nature Neeru accepts Ram’s love. But things take a turn around when Ram forcibly kisses Neeru in the public to save her. Why did Ram kiss her? Will their parents accept their budding love? How Ram- Neeru meet in the end forms the rest of the storyline.

Nuvila fame Ajay Manthena is adequate in his role as a happy go lucky guy Ram. There are a couple of nice steps in Challo Challo song. He should really work hard on his histrionics.

Debutant Jiyana overdid her role. She is looks good in the teasing scenes. Banerjee and Kasi Vishwanath are fine as fathers of Ajay – Jiyana. Ajay’s gang failed to evoke laughter.

Sivannarayana is appropriate as the apartment watchmen. Rests of the new cast in the film are very amateurish and irritating at times.

The basic storyline of the film is very thin. The way director started off narrating the flick in the first fifteen minutes looks good. However the execution of the story is very bland. The film rambles from one aspect to another planlessly. Screenplay of the film is tatty.

Direction by S.I. Mahendra is not upto the mark. Director should have taken some extra care on the second half narration. Narration of the film is irksome most of the times. Especially Cricket match, Ram’s Birthday sequence and Separation- realization scenes drag the film.

Music by Yogeshwara Sharma is adequate. Challo Challo song is good. Cinematography by Bal Reddy is mediocre. Editing by Vinay Ram is just okay. Dialogues in the film are routine. Choreography is alright. Production values by Sri Vignesh karthik Cinema are fine.

The initial scenes in the film are good. But the film drags in the first half and disappoints in the second half with the plain – boring narration. Entha Andanga Unnave is a simple script that often amuses the viewers with its hollowness director Mahendra has made this highly forgettable film that completely fails to make any impression