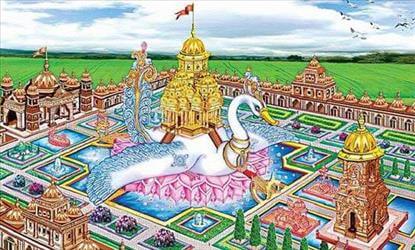 Amaravati is all set to get its major tourist attraction ready with Iskcon almost finishing the construction. It is named as the South India’s First Golden temple. The temple, is really getting build up in a great admirable, and a beautiful way as it is going to be a major International tourist spot.
The Iskcon temple is coming up with the construction of 108 mandaps in the South Indian style. And also,It is also being build up in the Rajasthani architectural style.A Swarna Hamsa (golden swam) is being built on and it is going kondaveedu.
The golden temple is likely to be an international tourist center after it is completed. After finding an idol of Vennamudda (butter) Krishna during the excavations at the foot of the Kondaveedu hill a few months ago. They say it is the only one of its kind in the Asian continent, built by Vijayanagara king, Krishnadevaraya.
The Golden Temple is coming up at a heavy cost of 500 Crore. Iskcon is undertaking the construction also with the participation (donation) from devotees, such as donating saplings for plantation, Krishna Leela idols, fountains, grills, bricks, cement, iron, sand, doors, marble, tiles, fans, silver and brass puja objects. For the
construction of the golden temple, the state government had allotted land.